The last of the midweek games for this summer saw Pollok entertain Largs Thistle at Newlandsfield. With Fraser having tweaked a hamstring Esplin became the last remaining ever present in the starting line-up this season. Alongside Fraser in missing out on a starting berth from the previous Saturday were Wharton, McWaters and Graham.

The home side started on the front foot and Weir showed a great turn of pace to get in behind the Largs defence. He cut back on to his right foot and his low shot was blocked. Forde’s acrobatic effort at the rebound sailed over the bar.

Forde was presented with another chance after good work by Grant and Lyon out wide but his header sailed over the bar. Minutes later his strike partner, Weir, did the same from a McKenzie cross. The chances kept on coming for Pollok and Lyon had a shot blocked with Grant firing the rebound – at the second attempt – straight at the keeper.

Pollok continued to dominate for the remainder of the first half with Forde having a couple of efforts go narrowly wide although it was Largs who spurned the best chance to open the scoring when McGinty latched on to a poor pass back by Horne. Although he managed to take the ball past Longmuir the goalie had done enough to hold him up and Horne recovered well to clear.

The start of the second half was a scrappier affair with Pollok struggling to create many openings and Largs happy to hit on the break. Longmuir did have to leap to his right to push one long range screamer over the bar but other than that was rarely threatened.

With seventy five minutes on the clock the partnership of Lyon and Grant again worked their way down the right flank. When Horne’s cross was only half cleared it fell to McKenzie who laid it back for Sideserf to send in a swirling cross to the back post. Grant did well to get in front of his marker and guide his header into the corner. It had taken a while but it was a deserved lead for the home side.

In search of an equaliser Largs started to leave more space at the back. Graham was on as a substitute and he got in behind the Largs defence. His cutback fell to Lyon whose shot was well saved. When the rebound came back to him he tried passing to Forde but the pass was intercepted and the chance was gone.

With a minute to go Largs got a free kick on the edge of the box. It was well struck but Longmuir got down smartly to push it away for a corner with a save which appeared to have preserved his clean sheet.

Then in injury time the Largs keeper launched a long ball forward into the Pollok half. Grant missed it and McGregor took one for the team in tripping McGinty outside the box and earning himself a yellow card. The referee was ten yards away and had a clear view in awarding the free kick. The linesman on the far side looking through a line of players was however convinced that the foul had been committed inside the box. The referee took his advice and changed the decision to a penalty. McGinty coolly slammed the penalty into the roof of the net to earn Largs a precious point in the fourth minute of injury time.

Television pictures later proved the referee had been correct in his awarding of the free-kick but unfortunately for the home side in the introduction of VAR is likely to be good a few years away yet in the West of Scotland League and it was two points lost as the sun set over Newlandsfield. 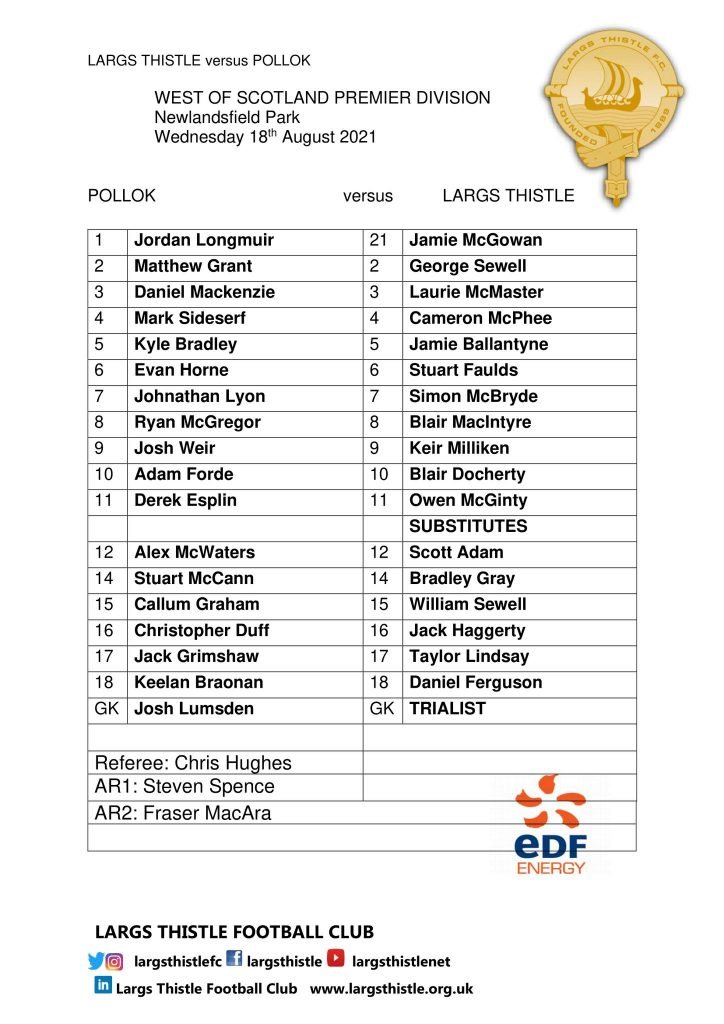 On the back of a disappointing result at Cumnock at the weekend, Pollok have a quick chance to get back to winning ways as we welcome Largs Thistle to Newlandsfield on Wednesday.

Largs went down 2-0 at home to Darvel at the weekend, so both sides will want a return to winning ways as soon as possible. Thistle have won two games so far this season, 4-2 at home to Rossvale and a 4-0 win away at Cumbernauld. They currently sit 17th in the table while Pollok remain in 4th.

The crowning glory for Largs came in 1994 when they won the Scottish Junior Cup at Ibrox, beating Glenafton 1-0. A host of former players have played at senior level, with former Man United, Leeds and Scotland defender, Gordon McQueen being the most notable.

Stuart Davidson has re-signed 10 players from last year and added another 6 new players to the squad.

Pollok are undefeated in our last six meetings with Largs and will be hoping to continue that form on Wednesday. Last time we played each other was at Newlandsfield on 21st December 2019 when ‘the Lok’ ran out 4-0 winners. Paul Gallacher, Shaun Fraser, Stuart McCann and Jordan Shelvey were the scorers on that occasion. A repeat scoreline would be welcomed by all Pollok fans.