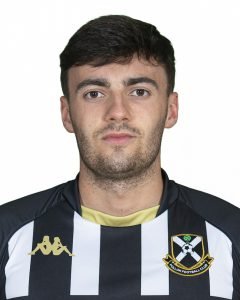 Central defender Kyle joined Pollok in May 2021 from Lowland League outfit East Kilbride. He began his professional career at Rangers after spending a few years in the Ibrox outfit’s youth system. In his time at Rangers, he made one first-team league appearance, coming on as a sub in a 2-1 away win over St Johnstone at the conclusion of the 2016-17 season. He was loaned to Clyde early on in the 2017-18 season and made four appearances in all competitions for the Bully Wee, then began a two-season association with Annan Athletic, appearing 61 times in the black and gold colours, netting four times. He joined up with East Kilbride for the truncated, covid-hit 2020-21 season. Kyle was released at the end of the 2021-22 season.