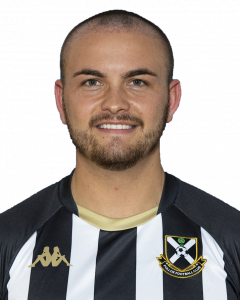 Defensive central midfielder Evan – brother and son of former players Josh and John respectively – began his professional career with Dundee United following spells in the youth system of both Celtic and Hearts. After featuring for their U20 side for 18 months, he departed Tannadice by mutual consent midway through 2015-16 and in the new year, signed for Dunfermline Athletic but again found his involvement limited to age football. He moved on to St. Mirren, his local team as he hails from Renfrew, in the summer of 2017 where he made the bench a couple of times but was loaned out to Annan Athletic for the second half of the season. He made his senior debut for the Dumfriesshire side as a sub at Berwick on 13th January 2018 and went on to make 16 appearances in the gold and black. Released by St. Mirren in the summer of that year, he went on trial at a couple of clubs, eventually securing a spot with Stirling Albion in September 2018. He remained there until the conclusion of 2018-19, making 17 appearances. His next stop was East Stirlingshire where he made 20 appearances in the Lowland League for them across 2019-20. Evan signed up for Pollok in April 2021 as a free agent. He renewed his Lok deal in May 2022 to remain in the black and white for a further two seasons.