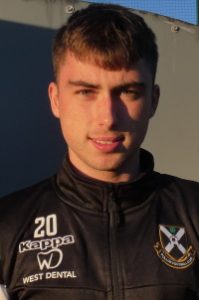 Keelan joined Lok in July 2020 from Airdrieonians where he had played since aged 11. He counts Hearts, St. Mirren, Hibernian and Motherwell among his previous clubs when much younger, and counts the Raemon Gormley Cup and Reserves Challenge Cup among his Airdrie honours. He was released at the end of the 2021-22 season.