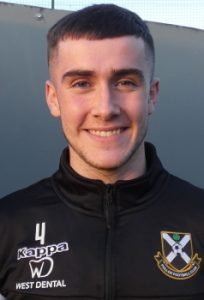 Jack, from Cumbernauld, joined Pollok’s development squad in July 2020 from the Airdrieonians youth set-up where he previously played under Stephen McKenna and Chris Ferguson. He is a composed, ball playing centre back/centre midfielder with real leadership qualities. He has been in and around many youth academies as his career has progressed.He was released at the end of the 2021-22 season.