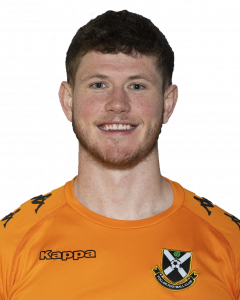 Goakeeper Josh joined Lok as a trialist for the closing stages of the 2018-19 season, signing up as competition to Jordan Longmuir at the conclusion of the season. He began his career playing with home-town side Helensburgh and Dumbarton United in the youth ranks, though signed for Dumbarton FC on Pro Youth terms when 16, signing for the then-Championship club on a contract basis a year later. he remained at the Rock for 3 seasons in total, moving onto Clydebank in the Juniors in 2015 and despite his youth, established himself as their No. 1. He was affected job-wise by the fire at Cameron House in December 2017 which led to a temporary work-related move to Cyprus and thus brought an end to his Bankies career in the latter stages of the 2017-18 season. He signed a contract extension with the club in October 2020, tying him to Newlandsfield until the summer of 2023.