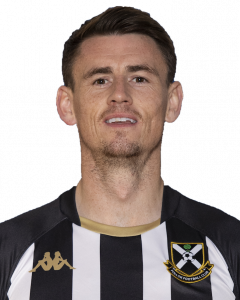 ‘Sidey’ is a left back who joined Lok in the summer of 2015 from Irvine Meadow. He was in the youth team of a number of senior sides early on in his career before dropping into the Juniors with Maryhill in season 2007-08. He had three years at Shotts thereafter before joining Meadow. He signed a new one year deal in May 2022, tying him to the club until June 2023.