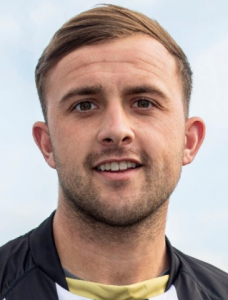 Wide midfielder Alex joined Lok in June 2021 on a one year deal. A native of Greenock, he began his career playing in the youth teams of clubs local to him, eventually signing for Morton aged 14. He remained at the Cappielow club for 5 seasons, though spent the last of those loaned to Largs Thistle. When released by Morton, it was to Largs that he eventually committed to following a competitive trial appearance for Annan Athletic in League 2 in August 2017, his only Scottish League appearance. He played 50 times all in all for Largs and transferred to Hurlford United in August 2018. His stay at Blair Park was short and after a handful of trial appearances for Port Glasgow, he signed up with Troon in March 2019 to see out the 2018-19 season. Alex’s next stop was Kilwinning Rangers, becoming a Buff in July 2019. He remained there until the end of the aborted 2020-21 season and made his first Lok appearance as a trialist in the return to action in June 2021 against Auchinleck Talbot. He transferred to Kilbirnie Ladeside in August 2021.