Match day five of the West of Scotland Premiership saw Pollok welcome Clydebank to Newlandsfield on a sunny afternoon. Pollok made one enforced change from the side which beat Huntly – Lyon replacing the injured Fraser whilst Clydebank started with former Lok strikers Little and Weir.

The game exploded into life virtually from the kick off. Clydebank clipped a ball over the top and in stretching for the ball Sideserf could only flick it into Little’s path. He flashed a powerful volley inches wide of the far post. Pollok’s response to this early scare was immediate. Lumsden launched a goal kick long down the right. After a header up into the air the ball was there to be won and Christie flicked it on to Buchanan who stabbed it forward. The Clydebank defence looked to usher it out of play but Buchanan showed great tenacity and wrapped his foot round the ball on the bye-line to get it across goal. McCann was waiting at the near post to apply a sublime finish from a tight angle to give Pollok the lead in the third minute.

After the early flourish the game settled down and chances were less frequent and predominantly from set pieces with neither keeper really tested. That changed in the twenty seventh minute. Under pressure Lumsden launched the ball towards the halfway line. McCann challenged for it and it broke for Buchanan. He strode forward before passing to Lyon who burst past a defender before flighting a cross towards the back post. The keeper palmed it away before a poor defensive header saw the ball land at the feet of Buchanan. His shot was not struck as sweetly as intended but it allowed McCann to divert home from eight yards out.

Although two behind Clydebank were far from out of it with Mullen doing well to concede a corner under pressure as a cross was whizzed across the goal-line and then Rumsby clearing a header off the line. On the stroke of half time Pollok produced another bit of incisive play as Buchanan floated in a cross after good work by Burns. The ball fell at the feet of Lyon who showed great close control to jink past two defenders and calmly roll the ball past the keeper. Unfortunately for the home side Hodge did brilliantly to clear the ball off the line.

The start of the second half was as frenetic as the first. A Clydebank move from the kick-off saw Little do well to get a cross in from the right and McGonigle volleyed towards the corner of the net. With Lumsden beaten Sideserf was on hand to slide in and clear off the line. Pollok’s first attack of the second half also ended in drama. McCann timed his run perfectly to latch on to a Christie pass over the defence. He got there well before Donnelly and touched it past him before being clattered. The referee reached for the red card and Bankies were down to ten men. After a lengthy delay, Clydebank made a substitution and the new keeper was immediately called in to action to save Burns’ free-kick. With fifty-seven minutes on the clock the ten men were right back in the game. A free-kick into the box was allegedly handled by Rumsby. The referee saw nothing amiss but his assistant flagged after vociferous appeals. Little calmly stroked the ball down the middle from twelve yards as Lumsden guessed wrong.

The loss of a goal had a positive effect on Pollok’s performance as they went up a gear to take a stranglehold on the match. Just after the hour mark a corner from the right was recycled from the left by Lyon who’s cross was headed against the bar by Burns. As Brownlie looked poised to head over the line two Clydebank defenders challenged him and McCann was left to apply the finishing touch from about an inch out. With just under half an hour left the home side led 3-1.

Five minutes later Burns was up for another corner – this time from the left. His beat his marker and kept the header lower this time to register the home side’s fourth goal of the afternoon.

With the game over as a contest the inevitable raft of substitutions slowed the flow of the game although the Southsiders did continue going forward. A good move down the left involving Duff and Buchanan ended with the latter slipping it into Christie whose powerful shot was well saved by the keeper. With seven minutes to go the referee was back in red card action. Duff had skipped past one man but had put it just a bit too far in front which allowed Hodge to nip in. Duff stretched for the ball and in doing so he appeared to slip and in turn caught Hodge and there weren’t too many arguments when he was sent off. Hodge had to be helped from the field and having used all their substitutes Clydebank finished the game with nine men against Pollok’s ten.

The capacity crowd  had been royally entertained by some slick attacking football, committed challenges and some refereeing decisions to debate, although he probably got the big decisions correct. If the games continue to be as entertaining as this one, Newlandsfield will be sold out every week. 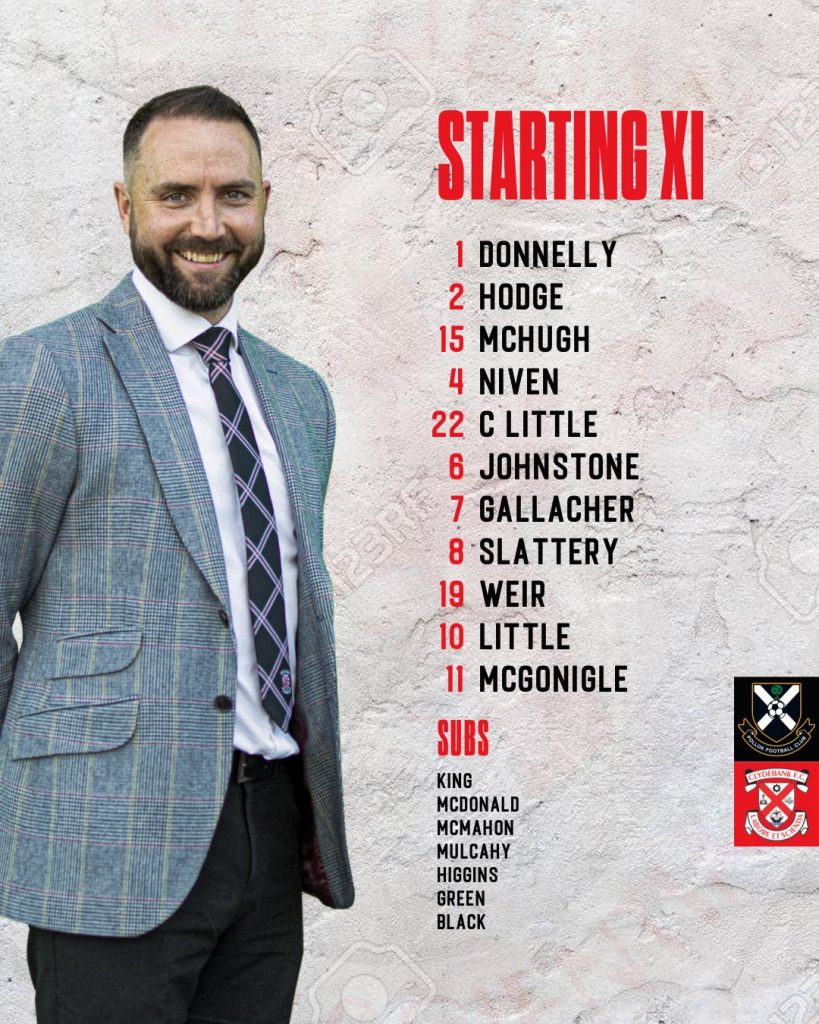