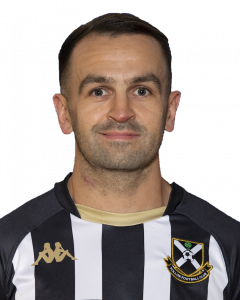 Wide midfielder / forward Darren originally signed for Pollok in June 2020 following six seasons with Beith Juniors. In his time at Bellsdale Park, he won the Scottish Junior Cup, West Super Premier League championship, Ayrshire Cup and the West of Scotland Cup. He has also played with Neilston Juniors, St. Peters Juveniles, Barrhead BC and both St. Mirren and, briefly, Celtic at pro youth level. 2020-21 was a non-starter for Pollok, but he committed his immediate future to the club by signing a contract extension in October 2020 to see him remain at Lok until the end of the 2021-22 season. Darren was loaned out to both BSC Glasgow and Annan Athletic during Lok’s season out of competitive action. He transferred to Stenhousemuir, having played under manager Stephen Swift at BSC, in the close season of 2020-21 into 2021-22 with only 4 friendly appearances in Lok colours accrued. After a very successful season with the Warriors, he re-signed for the club in June 2022.