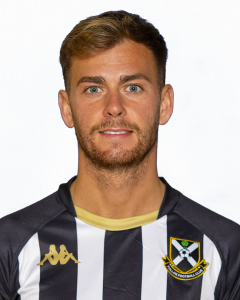 Full back Ryan, a Scottish U19 cap, joined Pollok in July 2022 from Lowland League side Broomhill. He began his career with Rangers in 2012 when they began their return to the top flight from League 2 and remained on their books into their first season back in the elite. He had loan spells with Falkirk and Annan Athletic while at Ibrox, ending his time there with a transfer to Elgin City. He had a second spell at Annan in 2017-18, remaining there for two seasons, then had his first taste of Lowland League action, with East Kilbride, in 2019-20. He spent the ‘covid’ season having a third stint at Galabank, then joined Broomhill ahead of the 2021-22 season.