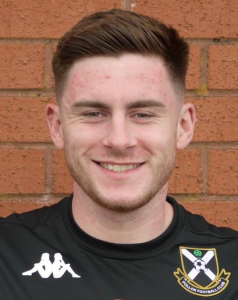 Striker Stephen joined Pollok in July 2022. He began his non-league career with East Kilbride FC, progressing to their Under 20 squad before transferring to Camelon in the Covid-affected 2020-21 season. He switched to Petershill for the 2021-22 campaign and had a very successful season with the Peasy, scoring 34 goals for them – the highest total since former Lok manager Andy Dailly hit 35 some 40 years earlier.