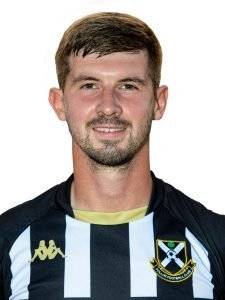 Defender David joined Pollok in August 2021 from Linlithgow Rose on a three-year deal. The central defender began his career on the books of Queen’s Park, but transferred into the Rangers youth system when he was 14. He remained at Ibrox until the end of the 2015-16 season, having signed professional in January 2013. He departed Ibrox without featuring for the first team, joining Ross County’s U20 set-up. While in Dingwall, he was loaned out to Elgin City and made his senior debut for the Black and Whites on the 28th January 2017 in a 3-1 win over Edinburgh City. His second senior appearance was also memorable for him, ending with an 81st-minute red card at Forfar. David spent 2017-18 and 2018-19 on the books of Airdrieonians and Stranraer respectively, playing regularly for both sides and accruing 54 appearances and 5 goals in League One between them. He spent the covid-hit 2019-20 season at East Kilbride and again was a regular, this time at Lowland League level where he made 31 appearances and scored twice in all competitions. He transferred to East of Scotland League side Linlithgow Rose in July 2020, making 12 appearances and scoring twice in all competitions for them.