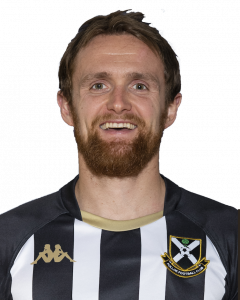 Central defender Scott began his professional career on the books of Rangers, signing for them days after his 16th birthday after a few years in their youth set-up. At the expiry of his deal, he transferred to Aberdeen, though in his three years with the club he did not play first-team football. He spent his final year at Pittodrie on loan to Stranraer where he made 27 appearances, netting once. Stranraer signed him upon his release from the Dons and he spent two further seasons at Stair Park, making 85 appearances in total at League 1 level for them. He signed for Peterhead in 2016 and transferred to Cowdenbeath midway through the season, remaining with them until the summer of 2018. He then spent four years with Clyde, making 109 appearances for the Bully Wee, scoring three times. He signed for Lok on an initial one-year deal in the summer of 2022.