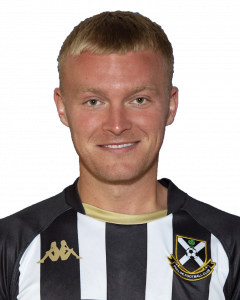 Right back Fraser joined Pollok in July 2022 from Cowdenbeath. He started off his career with Hearts, coming through the Jambos youth system and going on to make 8 first team league appearances. He transferred across the city to Hibs ahead of the 2013-14 season and played 3 times for the Easter Road side but switched to Raith Rovers later that season and appeared 10 times for them in the Championship that year. He moved on to East Fife for 2014-15 and remained in Methil for two seasons, switching across the Kingdom in 2016 when he joined Cowdenbeath. He remained at Central Park for six seasons and though a right back, he played mostly at left or right midfield in 2021-22.