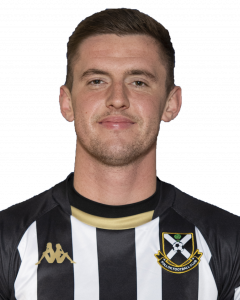 Central midfielder Dylan joined Lok in March 2022 from St. Cadoc’s on a deal through to the end of 2022-23. Dykes started off his career as a youth with Rangers, then signing professionally for the Ibrox side in 2012 as they worked their way up the divisions following the events of 2011-12’s close season. Like then-team-mate David Brownlie, he transferred to Ross County for season 2016-17, making two appearances off the bench in the top flight (his professional debut coming in the highland derby with Inverness Caley Thistle on 28/4/17) before spending 2017-18 on loan at Stranraer. He had a calendar year at Morton from January 2019 to January 2020 that culminated with another loan spell, this time at Stenhousemuir for the first half of the 2019-20 season, spending the second half on the books of Cumbernauld Colts after his Cappielow release. St. Cadoc’s picked him up for 2020-21 and it is from the McKenna Park side that Lok secured him.