Pollok welcomed Hurlford to Newlandsfield for match day 32 of the West of Scotland Premiership on a beautiful, sunny day in the Southside of Glasgow. Ideal conditions for a good game of football.

After the disappointing display at Kilwinning the previous week the manager made two changes – Wharton replacing Bradley and new signing Dykes coming in for Esplin.

Hurlford were the first to threaten with a free-kick curled over the wall which Longmuir had to be at full stretch to palm round the post for a corner.

Pollok responded with an instinctive volley on the turn after nice chest control from Forde. It would have been a goal of the season contender but unfortunately flew over the bar.

With 13 minutes on the clock Pollok’s striking duo gave a perfect example of pressing in tandem. Forde forced the defender into a back-pass and under pressure from McCann the goalkeeper sliced his clearance. McCann picked up the loose ball, steadied himself and fired goal-wards but the keeper had repositioned himself well and was able to save with a combination of hand and leg.

Moments later Pollok threatened again. A wonderful pass from McGregor put Lyon in behind the full-back. He cut in towards goal but fired wide of the far post.

Hurlford then had a couple of efforts on target. The first a dipping, bouncing long ranger which Longmuir did well to push away and then another free-kick over the wall which led to a much more comfortable save.

Midway through the first half the home team took the lead. New signing Dykes slipped a perfectly weighted pass into the box and McCann was brought down as he rounded the keeper. McGregor stepped up and confidently sent the goalkeeper the wrong way.

Hurlford went in search of an equaliser and fired one good chance wide before coming ever so close to finding a goal from a quick break down the right wing. When the cross came in the striker met it powerfully at the near post and although Longmuir got something on it the ball was still going to creep over the line until a wonderful goal-line intervention by Grant to keep Pollok’s lead intact at half time.

The start of the second half offered little in the way of goal mouth action with both teams limited to off target long range efforts. In the 55th minute Pollok swung in a corner which McGregor met with a looping header which went inches wide.

As the second half progressed the game became a midfield battle with Hurlford being the team to show the odd bit of threat in the attacking third as the home side seemed content with holding what they had.

With 82 minutes on the clock Hurlford produced a good passing move down the left wing. When it was swung in Miller found space between Menzies and Dykes and firmly planted a downward header past the helpless Longmuir.

In the remaining minutes it was Hurlford who came closest to finding a winner when a long ball was flicked on and momentarily it looked like the striker’s shot had got beyond Longmuir but he stretched out his right hand to grab it at the last possible second.

Very like the previous meeting between the sides this season both teams put in the effort but with both defences on top goals we’re always going be at a premium. A disappointing result for Pollok but given the balance of play and chances probably a fair result. 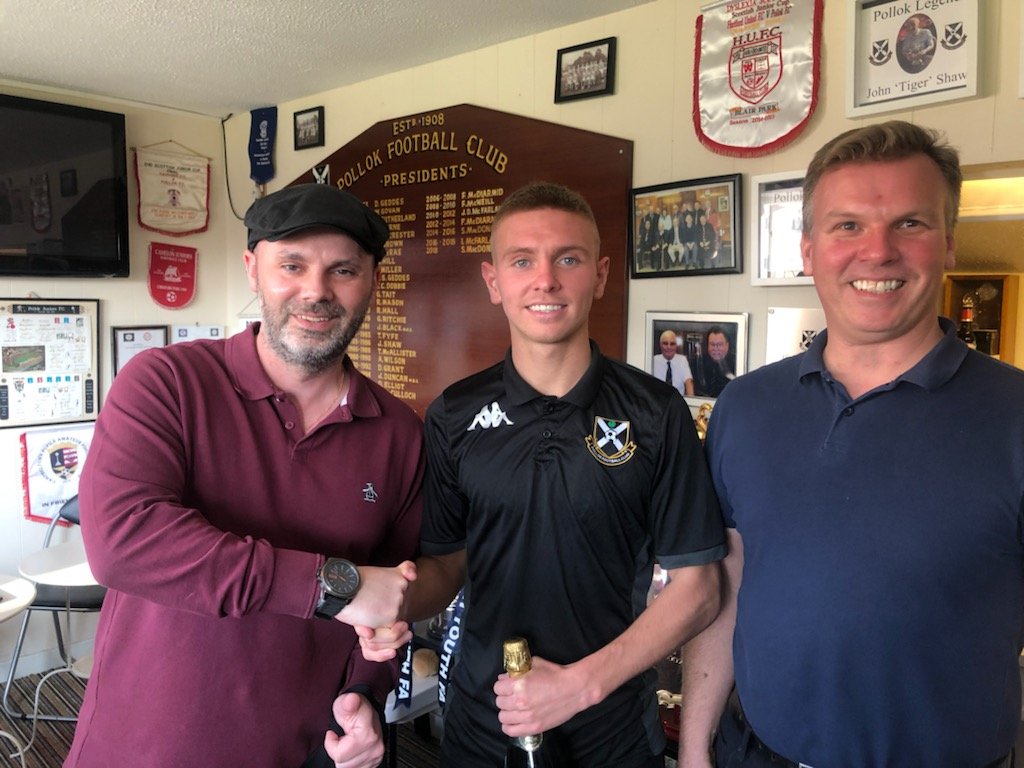 It’s back to Newlandsfield this weekend as Pollok welcome Hurlford to Glasgow for a crucial WoSFL Premier Division fixture.

It was disappointment last week when we suffered a 2-0 defeat at Kilwinning and will be hoping to get back to winning ways.

Hurlford beat Clydebank 2-1 at Blair Park last week, in their last five matches they have won two and lost three, they currently sit 6th in the WoSFL Premier Division with a record of won 15, drawn 6 and lost 9, with a points tally of 51.

Our recent record against Hurlford hasn’t been the best, one win, one drawn and three defeats.  Last time we met was in August 4th last year, when we left Blair Park with a point after a 0-0.

This weekend’s match is part of The National Lottery Football Weekend where if you buy a match ticket, you get one free if you bring a valid Lottery ticket. So grab a friend and introduce them to the delights of Scottish non league football, just remember your Lottery ticket.