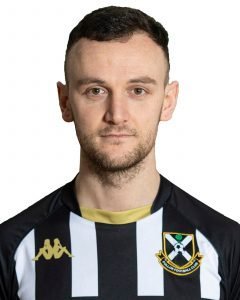 Jordan joined Pollok from Clydebank in November 2019. He began his career playing football at youth and amateur level in the Dumbarton area before joining Clydebank in 2014 from Dumbarton Harp. He was a Bankie for over 5 seasons and made 171 appearances for them, netting 51 times. He transferred to Pollok in November 2019 but a combination of lockdown and work commitments has limited his game time substantially. In October 2020, he signed a deal tying him to the club until June 2023.