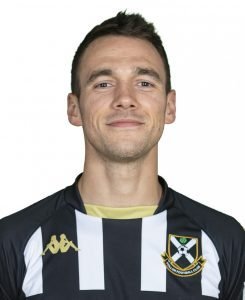 Midfielder Shaun signed for Pollok in June 2018 on an initial one year deal after joining from Kirkintilloch Rob Roy. After being picked up from the Partick Thistle youth system, he began his professional career with Ross County but dropped into the juveniles with Glasgow Amateurs upon his release. Petershill were his first Junior side, signing for them in the summer of 2008 and a year with Peasy was followed up by four at Ashfield. He then had single season spells with Irvine Meadow that were split by a year as a 1st team regular with Queen’s park – he made 31 league appearances and scored 7 goals as a Spider. It was announced in October 2020 that Shaun had signed up through to the end of the 2022-23 season.