The visitors to Newlandsfield for match day eleven of the West of Scotland League were Darvel who arrived as odds on favourites to win the match against a Pollok side supposedly weakened by injuries. A crowd of over 900 enjoyed the sunshine as the teams took to the park. Pollok giving a debut to centre-half David Brownlie –   who had signed the previous day from Linlithgow Rose – as one of three changes from the previous Saturday’s win in the cup.

Darvel started the game brightly. Knocking the ball about with assurance and putting in some dangerous crosses. Pollok were struggling to get much of the ball and only a superb cross-field pass from Sideserf to Grant created much danger but Grant’s cross was cleared.

The goalmouth action went up a notch in the twelfth minute when a rare long ball from Darvel turned the Pollok rear-guard and hesitancy allowed the Darvel striker to nip in and lob towards goal. Longmuir was just able to get back to his line in time to claw the ball away from under the crossbar and McKenzie was on hand to complete the clearance.  Moments later Darvel spurned another good opportunity when a free header from eight yards out was put wide.

With fifteen minutes on the clock the deadlock was broken – against the run of play. Grant fed Lyon wide right and when his dangerous crossed was fired in the Darvel centre-half was happy to put it out for a corner. However his defensive colleague had other ideas and in successfully keeping the ball in play could only fire it back across goal where Weir met it with a glorious diving header into the corner of the net.

The goal seemed to rock Darvel’s confidence and minutes later Truesdale had to look sharp diving at the feet of a marauding Grant to prevent a second goal for the home side.

Whilst Darvel’s confidence took a dip the home side’s was soaring. In the 27th minute the crowd were treated to some wonderful, intricate interplay down the left by Sideserf, McKenzie, Weir and Fraser. When Fraser’s cross arrived at the back post Grant was there to meet it but he couldn’t keep the header down.

The home side’s next attack saw Fraser release Weir with a perfectly timed pass through the Darvel defence. Weir got to the bye-line and then jinked back on to his left foot. As he was about to strike for goal he was unceremoniously barged off the ball by a panicking defender. The referee waved away the penalty appeals.

Shooting down the slope Pollok continued to look extremely dangerous on the break. After Grant carried the ball out of defence and into opposition territory he played a beautiful pass over the Darvel rear-guard. Weir got there just ahead of Lyon – who was perhaps better set for a shot – but his effort was well saved by Truesdale.

The half time whistle went with the home side in the lead and despite a decent amount of possession Darvel had rarely troubled Longmuir in their search for an equalizer.

The start of the second half saw both teams having a series of efforts from outside the box which did not overly exert either keeper. Wharton produced a variation on his long throw straight to Fraser on the edge of the box but his looping volley was held by Truesdale.

Despite a lack of goalmouth action compared to the first half it was still an entertaining watch as Pollok’s work rate, discipline and tactical nous deprived Darvel of a way back into the game. These attributes were present throughout the team but epitomised by Fraser playing in a slightly more advanced role. A well earned three points from a performance the players and coaching staff can be extremely proud of. 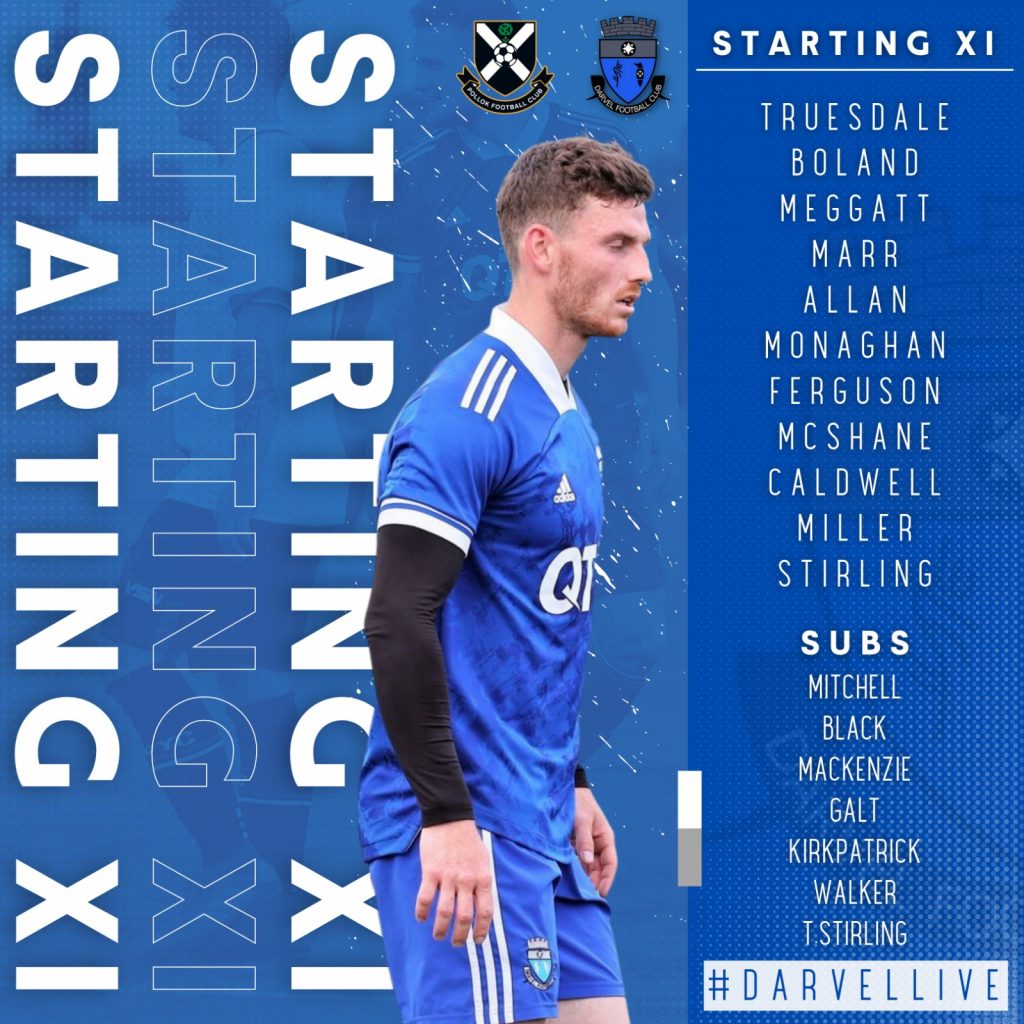 A midweek free of football for a while has whetted the appetite to see The Lok back in action. After our 7-0 win last weekend in the Scottish Junior Cup at Newlandsfield against Maybole, Darvel will visit Glasgow on Saturday in league action.

Last weekend Pollok had six different scorers in the win over Maybole, however it was a 4th minute own goal that got the goalscoring under way, followed by goals from McCann, Grant, McGregor, Weir, Graham and that man Forde continuing his fine start to the season with another goal. Forde has now scored 7 this season, followed by Graham on 5.

Darvel were in league action last weekend as they left Clydebank with a 2-2 draw. This result left Darvel 5th in the table on the same points as Pollok, the Ayrshire club have a game in hand. Their current record is won six, two drawn and one loss, scoring 22 and conceding 9. Their solitary loss was away to Kilwinning Rangers.

Darvel were formed in 1889 and are currently managed by Michael Kennedy, they gained promotion to WoSFL Premier Division after being declared joint winners of West Region Championship with Blantyre in 2019-20. The club reached the Scottish Junior Cup final in 1976 but fell at the final hurdle, losing 3-0 to Bo-ness United.

For the last meeting between Pollok and Darvel, we have to go back to 9th February 2008 for a West of Scotland Cup tie, Pollok ran out 10-3 winners at Newlandsfield, four goals from Dingwall, three from Downs, with goals from Newall, Logan and Hyslop taking the scoring to ten.