It was third against fourth as Pollok welcomed Kilwinning to Newlandsfield for match day 14 of the West of Scotland Premiership. The home side didn’t even need to wait for the referee’s whistle before suffering another injury blow with Sideserf hurt during the warm up. McGregor took his place in the centre of defence.

With two minutes on the clock Pollok were the first to threaten as a Horne through ball turned the Kilwinning defence. The outrushing Barclay got there just before McCann and knocked the ball out of play. From the resulting throw in McKenzie found Lyon who dribbled his way into the box but could only find the side-netting with his shot from a tight angle.

More good work by Lyon and Esplin set up a shooting chance for Fraser but he couldn’t find the target from twelve yards out. The game was swinging from end to end with two well-marshalled defences doing sterling work. Midway through the half Longmuir was called upon to tip a powerful back-post header over the bar and just before the half hour mark Kilwinning spurned the best chance of the game so far when a long ball evaded the Pollok defence but the striker’s lob was too heavy and the ball landed on top of the net.

With three minutes to go until half time Longmuir lined up a goal kick. The vast majority of the players on the pitch were lined up down the left hand side with Grant in splendid isolation on the right. Longmuir pinged a beautiful pass to him and the re-adjusting Kilwinning defence couldn’t get close enough to him to stop him flicking on for Lyon. He held of a defender before firing the ball across goal where a sliding McCann knocked it home from six yards. Pollok led by a goal to nil at the interval.

The second half started with Kilwinning very much on top. They had a goal disallowed for offside and Millar was causing all kinds of problems down the left. It was from one of his runs that Kilwinning were awarded a debatable corner and when it was swung in Smith rose highest to nod home. On the balance of play it was a merited equaliser.

McGregor went off as Pollok changed to a back four with Duff coming on to provide some width on the left. Despite being on top Kilwinning also made changes – including removing the impressive Millar – and seemed to lose all their impetus. So as the game entered its’ final stages it was the home side shooting up the hill who looked the more likely to find a winner. Forde had a long range effort deflected wide and Fraser shot straight at the keeper from the edge of the box.

With six minutes left Graham won an aerial duel and knocked the ball down to the influential Lyon. He took an exquisite touch before playing a beautifully weighted pass to Duff in the inside left position. His swerving left foot strike left Barclay with little chance and the home side led again.

The Southsiders were able to see out the remaining minutes without too many scares and defended a couple of set pieces resolutely whilst still looking good on the counter attack.

It was another of those performances where all fourteen players who took part deserve plaudits but Johnny Lyon was the stand out as his exciting partnership with Grant continues to blossom.  The impressive victory took Pollok up to second in the league and sent the home fans home happy. 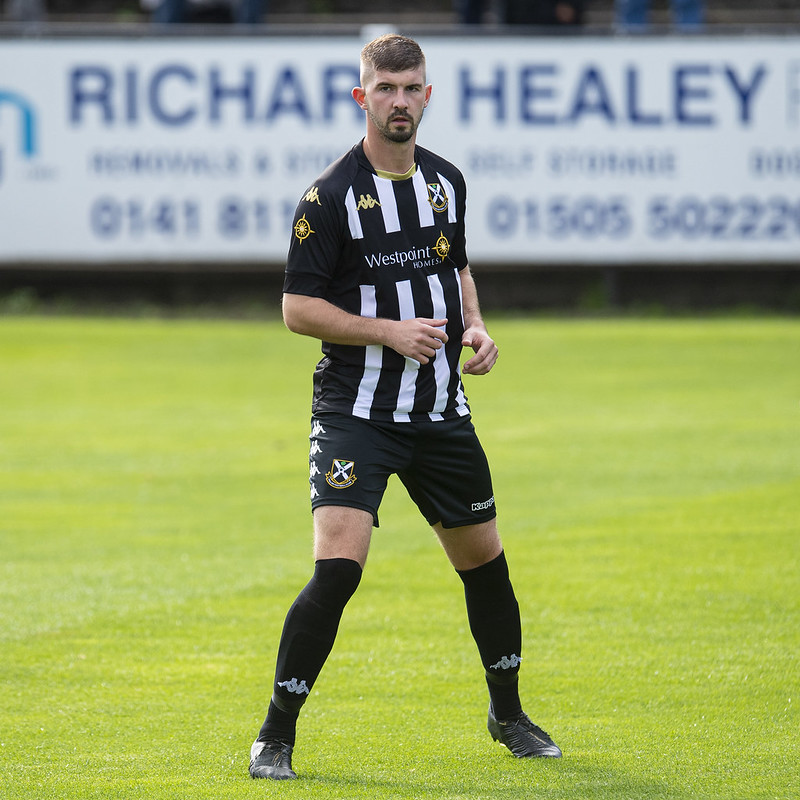 It’s another big game in the WOSFL Premier Division as Pollok welcome Kilwinning Rangers to Newlandsfield. Third versus fourth, a point between both clubs, it should be another cracker.
Last weekend Pollok overcame Rossvale at Newlandsfield in a tight game, some fine goalkeeping from Rossvale’s Craig Gordon, kept the score to 1-0, after a beautiful edge of the area strike form Derek Esplin that rifled into the top corner. This match brought us level on games played with Kilwinning who were in South Challenge Cup action, when they beat Ardrossan Winton Rovers 7-0, Ally McColm scoring a hat-trick.
The Buffs record in the league so far sees them with a record of 8 wins, 4 draws and just the one defeat, scoring 35 and conceding 12, their defeat was away to Cumnock, losing 1-0.
Kilwinning were formed in 1899, they became the first Ayrshire side to lift the Scottish Junior Cup in 1909, they would have to wait a hundred years to win it a second time, a 1-0 win over Kelty Hearts would see the famous old trophy go back to Kilwinning. The club have been managed by Chris Strain since 2014 and feature former Pollok player, Carlo Monti amongst their squad.
The last meeting between the clubs took place on 2nd November 2019, it was to be Kilwinning who left Newlandsfield with all three points, as a Carlo Monti goal was the difference between the sides.
There will be a food bank collection before the game at the Pavillion, anything you can donate would be appreciated.