If you’re looking for a last minute gift or just want to treat yourself, our kit partners over at Only Sport have added some great new Pollok kit and merch to the range.

As well as the new Kappa Pollok kits, the range now includes jackets, gilet’s and bobble hats. An ideal time of year to keep warm and wear the Pollok badge with pride. 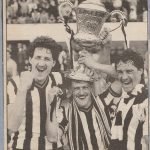 It is with sadness that the death of Pollok’s 1985 Junior Cup winner Derek Lea was reported this week, aged 61. The Govan born forward signed for Lok in November 1983 from Australian outfit Croydon City and had spent a number of years with Renfrew prior to that. Following his Junior Cup win for Lok in 1985 versus Petershill, he moved on to play with the opponents that day then Shotts Bon Accord, a return to Renfrew, Dalry Thistle, Dunipace and Port Glasgow where he ended his Junior career at 33. Deepest condolences to his family and friends from all at Pollok FC.

It was also announced today that Jim Marr has passed at the age of 59. He was loaned to Lok by Celtic in season 1977-78 and went on to play Junior with Largs Thistle, Neilston and Port Glasgow where he played alongside Derek Lea for a few seasons. Again, deepest condolences to all that knew Jim. A sad few days for the Lok family.

Pollok FC can confirm tonight that Chris Dallas has been transferred to St. Cadoc’s for an undisclosed fee. This move gives the striker a chance to link up once again with his Glenafton boss Craig McEwan. Pollok FC wishes him well for the future.

Pollok are delighted to confirm that 18 of the first team squad have committed their future to the club by agreeing 1 year contract extensions.

Commenting on the news, Pollok manager Murdo Mackinnon said; “Delighted the lads have committed themselves to the club. Tremendous loyalty shown by them all. We’ll be back, stronger than ever”.

It can be confirmed that Pollok have withdrawn, without penalty, from the South Regional Challenge Cup for season 20-21. The match Lok were due to play was against Tranent Juniors on 24th October. The East Lothian side now have a bye to Round 2 where they will face Ardeer Thistle.

In more positive news, Stephen McKenna confirmed to the website today that the U20 Development side plan to continue with their season. Sponsors are wanted for a number of players still (you can see who is sponsorless by clicking on their profiles here) and if you would like to give the Young Lok your backing for 20-21, please get in touch via their Twitter page:

Pollok Football Club has contacted the West of Scotland Football League stating that the club intends to withdraw from football for season 2020-21.

Yesterday morning (Saturday 10th October), the WoSFL released the results of a survey of clubs in which a narrow majority of clubs voted for football to recommence on 24th October.

Clubs who wished to withdraw were given a deadline of 17:00 today (Sunday 11th October) to confirm whether they wish to take part, or not.

After consultation with committee, members, supporters, management and players, the overwhelming belief of all stakeholders is that it is inappropriate for Pollok to be involved in football while present pandemic restrictions are in place.

As with many matters at present, the issue is complex and multi-faceted.

That said, the overarching concerns of all involved were:

While we are all keen to return to our usual Saturday routine after months of restrictions, it would be quixotic for us to jeopardise the physical health of members of our community, or the long-term fiscal health of our club to simply play football for the sake of playing football.

We would like to place it on record that the club’s preferred option was for the league to consider other possibilities, including suspending football until pandemic restrictions were eased.

Should it become the case that other possibilities are considered, Pollok would be more than happy to engage.

However, given the present choice that has been put to us, the only reasonable decision we can take is to withdraw.

The West of Scotland Football League have published the results of their survey that asked clubs if they wished to delay the start of the season. The vote was close, but YES to starting was carried 36 to 31. 14 clubs indicated they did not wish to participate in season 20-21 and they have until 5pm tomorrow (11/10/20) to confirm.

Pollok FC this week can confirm that Dominic Larkin has been released from his Lok contract due to a change in work circumstances. Speaking to the website about pre-season, manager Murdo MacKinnon said:

“Unfortunately he’s not been involved much due to his work commitments. His new career will take up most of his time.

“This situation is something that has come up and it’s an opportunity that Dom can’t turn down. I wish him well with his career and the future – he’s a terrific lad.”

All the best Dom from all at the club.

In terms of Lok’s three games so far, and pre-season in general, Murdie added:

“The games have gone well – there have mainly been positives.

“There are still a few things to work on and get up to speed with, so very happy with the players overall. The new signings have fitted in well and the squad as a whole is strong.”

The new season is still very much an uncertainty. Clubs met last night over Zoom to discuss a number of issues and a vote will take place on Friday to determine when and how the season starts. There is increasing concern over the lack of fans being allowed into matches alongside a rise in covid-19 cases. National clinical director Jason Leitch told the BBC this week that discussions have not even been held with football authorities to permit smaller clubs to allow supporters into grounds as the focus is on the rise in cases.

Elsewhere in the pyramid, the following dates are being worked to (subject to any future Scottish Government restrictions):

Edit: The SJFA announced on 8/10 that their own regions would delay until 21st November.

Pollok’s next official fixture is 24th October vs. Tranent, but there will likely be closed doors friendlies in the interim. News of them will appear here and on Lok social media.

Following yesterday’s news that the West of Scotland Premier League will operate as two group sections for the forthcoming season, the league have announced the Gameweek 1 fixtures for all clubs. The Lok will begin a new era in the WOSL with a home fixture against Beith. There will be familiar faces on both sides as new Lok signing Darren Christie faces his former club whilst Beith are now managed by former Pollok midfielder Bryan Young.

The date is still to be fully confirmed but we are hopeful of hearing the start date soon, at which time the full fixture list will be released. At the moment our planned South Challenge Cup fixture against Tranent goes ahead on October 24th.

The other fixtures for the opening weekend of the West of Scotland League are as follows;

Kick off 2pm unless otherwise stated 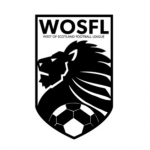 The effects of covid-19 continue to haunt Scottish football, and the 20 team West of Scotland Football League Premier Division will run as two groups for 2020-21. Pollok will be in Group B .

Lok’s full group, confirmed by secretary Kennie Young and later the WoSFL, is to be:

The exact format of the new set-up to be confirmed in due course but what is proposed is to play everyone in each club’s own group twice with another 10 fixtures to follow. The West of Scotland Football League however are consulting with all clubs about how we restart and one proposal is to delay the season kick off until October 31st 2020. There are, as it stands, no plans to move the Tranent game from 24th October.