Skip to content
Just the goals from Mark Donnelly: 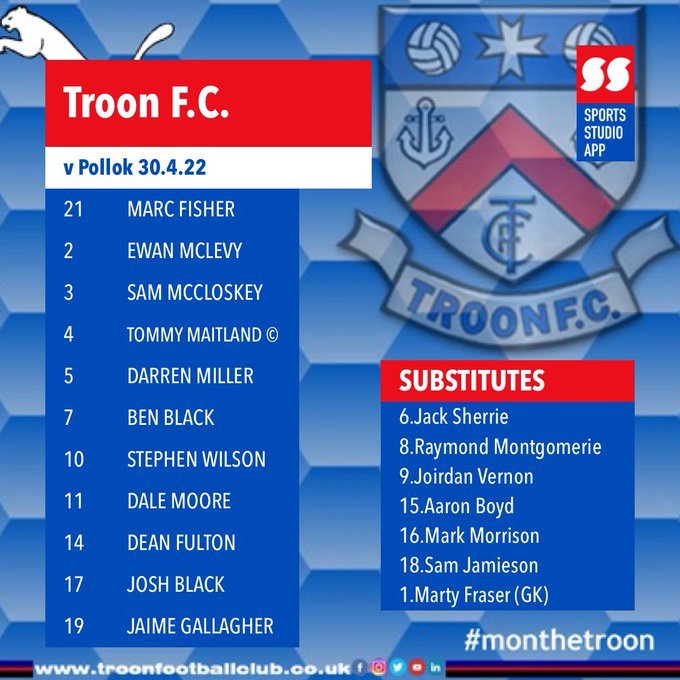 Pollok make the trip down Portland Park to take on Troon in WoSFL Premier Division.
The ‘Lok currently sit 3rd in the table, a point ahead of Clydebank, and hoping to get back to winning ways.
Troon come into the game sitting 7th in the table with 53 points. They have a record of won 16, drawn 5 and lost 14. In their past five matches they have lost to league leaders Darvel midweek, preceding that they beat Cumbernauld, Maybole, Kilbirnie and a draw away to Hurlford.
Pollok have won three of the last five meetings between the sides, one drawn and Troon knocking Pollok out of the West of Scotland Cup in 2019 on penalties the other result. The last game between the sides was at Newlandsfield on 23rd October last year, when Pollok won 2-1 courtesy of goals from Stuart McCann and Callum Graham.
There has been a football team in Troon as far back as 1875, the current club were formed in 1946. Manager Jimmy Kirkwood is in his second spell after a two-year period as General Manager. Kirkwood led Troon to promotion to the then newly formed West Premiership in 2018 at the first time of asking after relegation the year before.

Murdie MacKinnon was left disappointed as his Pollok side crashed out of the Ardagh Group West of Scotland Cup Second Round last week as Troon knocked them out on penalties after a 1-1 draw at Portland Park.

The Seasiders took advantage of Pollok?s lacklustre start to the game when Jamie Martin?s darting run from the left hand side saw him get inside his full back and into the box. After feeling a strong pull of his shirt he fell to the ground leaving ref Calum Scott no option but to point to the spot. Ryan Stevenson stepped up and fired the ball into the bottom left hand corner beyond Jordan Longmuir four minutes in.

Half way through the first half, Byran Young was played in by Stefan McCluskey?s ball from the left hand side, his goal bound shot from the edge of the area was heroically headed off the line by Lewis Clark. With ten minutes of the first half remaining, Stefan McCluskey was again played through by a ball over the top from Ryan McGregor he rounded Scott Johnstone but could only find the side netting meaning Troon went into the break 1-0.

With 20 minutes to go Ryan Stevenson saw his shot from 25 yards fly wide of the goal after a great counter attack from the home side. With seven minutes of normal time remaining Pollok drew level. The lively Stefan McCluskey and substitute Adam Forde combined at the edge of the Troon box with a neat one two, McCluskey found the space on the right hand side, he opened up his body and fired across Johnstone into the far corner from the angle.

With the match level after 90 minutes Scott Johnstone stepped up and saved Troon in the penalty shootout. Saving Jamie Henry?s well hit spot kick headed for the bottom left corner and unnerving Stefan McCluskey who could only smack the upright.

This left Dan Mckay, Ryan Stevenson, captain Dean Keenan and Dylan Pooler to send Troon through to the next round.

Speaking to the programme, MacKinnon said;

?I?m frustrated, we were really poor for the first 15 minutes and we let them in and made our own problems. We had a lot of the ball and didn?t create a lot and overall we could?ve been better. We struggled to deal with the weather and Troon came at us and broke very well. They coped very well and they fully deserved their win.” 88? Troon make their last change with Simpson coming on for Stevenson

75? McKay replaces the goalscorer Love for the hosts

63′ Brash picks up a yellow card for the Lok

46′ Second Half underway at Portland Park