Murdo MacKinnon’s view on the game: 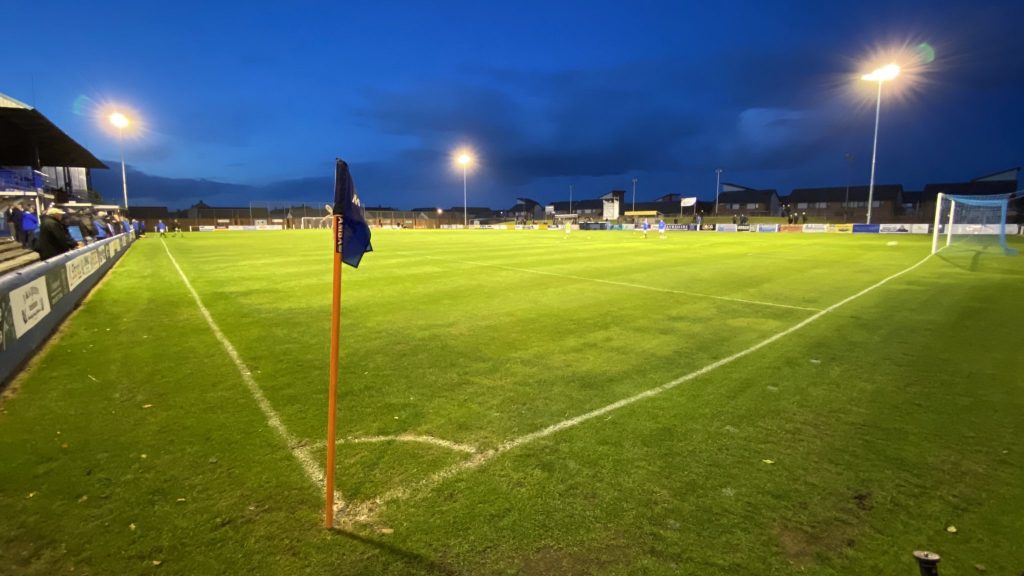 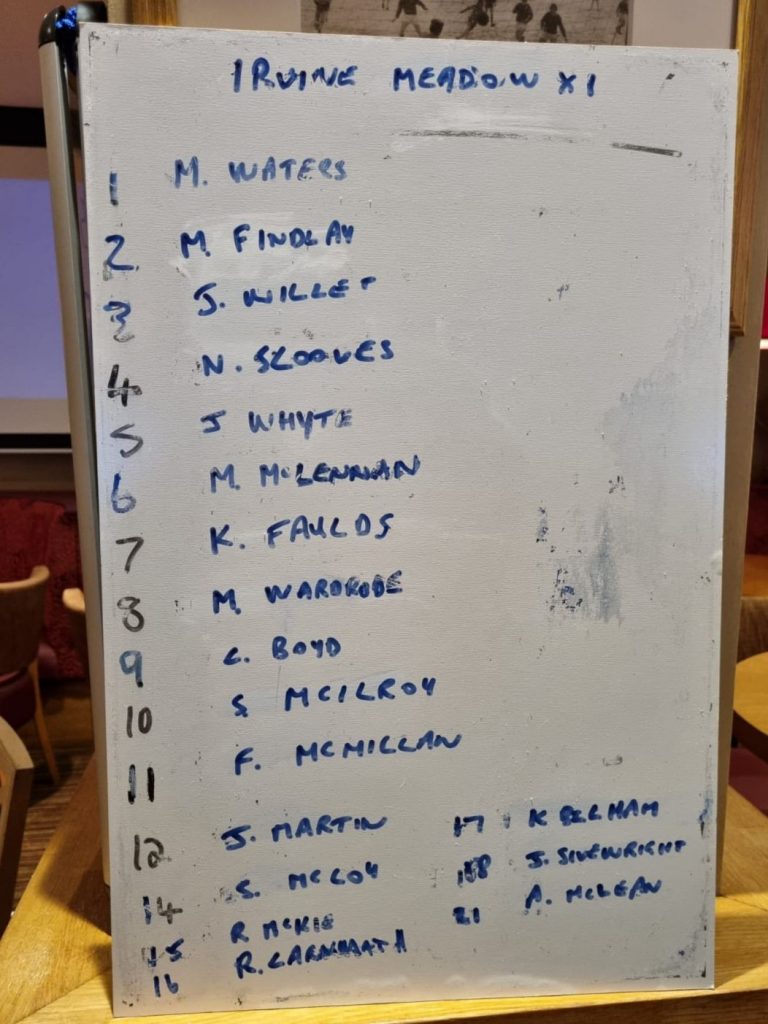 Meadow Park, Irvine is the venue for a midweek match with Irvine Meadow XI in the WOSFL Premier Division.

As Pollok’s game was abandoned against Irvine Vics on Saturday, across the town Medda came from a goal down to knock out Arbroath Vics in the Scottish Junior Cup, 4-1 the final score. It did take Medda until 13 minutes from the end to equalise through Mick Wardrope, followed quickly by goals from Jared Willet, Jamie Whyte and Connor Boyd.

In the league, Irvine sit 8th with 6 wins, 2 draws and 3 losses. In their last league game, they beat Benburb 1-0 at New Tinto Park with a Mark McLennan penalty.

Meadow were formed in 1897, and are one of the most successful teams to come out the juniors. They have won the Scottish Junior Cup on three occasions, the last time in 1973. Their last trophies came in 2012 when they lifted the West Region Premiership and the West of Scotland Cup.

The last meeting between the clubs came on 12th October 2019 at Meadow Park, the match finished all square, 3-3. The Pollok goalscorers were Jamie Henry, Adam Forde and Stuart McCann in what was a dramatic comeback for The Lok having been 3-0 down with 20 minutes to go.

Due to the outbreak of COVID-19 in Scotland, this fixture has been postponed

Pollok looked to shake off the disappointment of defeat in Auchinleck with a top of the table clash away to Irvine Meadow XI on Match Day 12 of the McBookie West Premiership. Grant Evans returned from suspension in place of Danny Boyle and the midfield saw Esplin recalled and Iain Russell take on a deeper role than he is used to.

Irvine dominated possession in the first half although it was Pollok who had the better attempts at goal. Forde had already forced a corner with a decent long range strike when in the 9th minute McCann was crudely stopped in his tracks by Willett during a pacey and dangerous looking Pollok counter attack. The yellow card he received was seen by the home support as taking one for the team. The away support felt the card could have been a different colour.

With Pollok missing the skills of Fraser in retaining custody of the ball in the midfield and playing into a strong headwind Irvine continued to dominate possession without carving open the Pollok defence. At least that was the case until the opening minute of first half stoppage time. They won possession in midfield and one quick pass to Willett allowed the left back to roll the ball across goal to the onrushing McTernan who gave Lumsden no chance with a coolly slotted finish. It had been a poor first half and gave little clue as to the excitement the second half would generate.

In the fifty sixth minute Dallas produced a clever header from an Evans long throw which Newman did well to tip on to the bar. Pollok were enjoying more possession now as the game began to open up but just after the hour mark an alarming gap appeared in the middle of the Pollok rear guard and one good pass from Spence released McTernan who slide the ball under the onrushing Lumsden to double Irvine?s lead. And within five minutes the situation was looking even bleaker for Pollok. Irvine won a free kick out on the right. The two standing over the ball employed an old Scotland routine of pretending to both have dummied it in an apparent mix-up and as the defence relaxed McCrae whipped the ball in for the unmarked Slooves to side foot home from six yards.

Dallas and Russell had now been replaced by Duff and Gary McCann so that Stuart McCann and Forde were now playing upfront as a partnership. Irvine appeared to think the game was won and to be fair not many people in the ground would have disagreed with them. With just over twenty minutes to go however the whole complexion of the match changed. An attempted headed clearance from McCrae was mistimed and when the ball fell for Forde he absolutely lashed home an unstoppable left foot strike from twenty five yards. It?s unlikely any in the ground will see a finer strike all season.?

With Forde?s strike the mood in the ground had changed and with it so did the pattern of play. Pollok were now in the ascendancy and pushing numbers forward at every opportunity. An Evans long throw in the seventy seventh minute was flicked on at the near post by Gallacher and Henry despatched the ball into the bottom right hand corner with a textbook overhead kick. The change in mood was reflected in Newman receiving a booking for time wasting in the aftermath of the goal.??

Pollok were now pushing hard for an equaliser and it arrived in the eighty third minute. A Sideserf long throw was partially cleared to Gary McCann whose cross found his brother Stuart. His first attempt was blocked, as was his second attempt. But when the ball came back to him a third time he calmly controlled it on his chest and found the top right hand corner with a beautiful volley.?

Pollok couldn?t find a fourth and the game ended on a sour note when Sideserf was sent off for a second yellow card. Whilst he can have few complaints he perhaps could have been joined in the walk down the tunnel by Willett and McCrae had the referee not been so lenient.

So a stirring Pollok comeback in a pulsating second half allowed them to retain their lead at the top of the West Premiership before a third tricky trip to Ayrshire in a row with Hurlford their next opponents. Peter Thomson