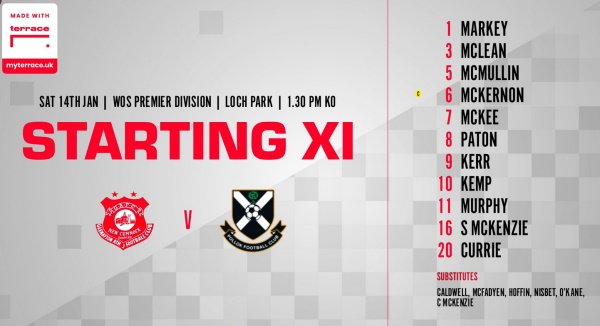 PREVIEW
It’s a trip to Ayrshire on Saturday as Pollok travel to Loch Park to take on Glenafton in the WOSFL Premier Division.
Pollok were involved in a 3-3 draw last weekend away to Benburb in a southside derby, goals from Stuart McCann, David Brownlie and Shaun Fraser put the’Lok ahead before Benburb scored three goals in the late in the game to equalise.
At the same time Glenafton, went down 2-1 at home to Kilbirnie so should make a good game as both teams try to get back to winning ways.
New Cumnock based Glenafton were formed in 1930, the club have won the Scottish Junior Cup twice in 1993 and 2017. They also won the West of Scotland Super League Premier Division in 2017. Former striker Mick McCann is the manager and was part of the 2017 team.
This season, Glenafton sit 12th in the table as it stands, with a record of six wins, two draws and nine defeats, sitting with twenty points.
We last played Glenafton on the 24th July in the third game of the season, both sides had disappointing results in the preceding match then too. Pollok ran out 2-0 winners at Newlandsfield with goals coming from Stuart McCann and Adam Forde. Gaffer Murdo MacKinnon heaped praise on his sides performance at Loch Park on Saturday afternoon after a 0-0 draw ensured a Scottish Cup 4th Round Replay at Newlandsfield this Saturday.

In an evenly contested tie, Lok had the first chance of the game in the first few minutes with Stuart McCann?s rasping effort being tipped over by the sprawling McGarrity in the Glenafton net.

Matching his goalkeeping counterpart, Jordan Longmuir then produced a fine save keeping out Mick McCann?s header which was destined for the top right corner after McAusland pinged a great diagonal over the top.

In the Second Half the returning Adam Forde saw his ferocious volley blocked by McGarrity?s mid-rift. With Bryan Young?s follow up being blocked for a corner.

MacKinnon commented ?I?m really proud of the boys today, they performed excellently in a place thats hard to come and get points from. I thought personally we controlled the game at a good tempo and we possibly just edged it.

?Their keeper pulled off some incredible saves to deny us as did Jordan who was on top of his game today. It (the tie) was always going to be decided by a mistake or a bit of class, which is expected for two teams so evenly matched.

?I told them this is only half time and that we have to take the game to them back at home in-front of our fans. Something which we will prepare for considerably this week.

?Overall there?s still a bit of work to do but we?re still in the cup and hopefully we can put on a show on Saturday.? Pollok made it a hat-trick of draws in the League on Saturday, coming away from double winners Glenafton Athletic?s Loch Park with a share of the points after a 1-1 draw.
?Afton were reduced to ten men in the 28th minute when David Gray?s challenge on Ross Brash was deemed worthy of a straight red card by arbiter Chris Gentles.
The visitors took a 40th minute lead when Mark Sideserf?s Garryowen caused confusion in the home rearguard. Ryan McGregor managed to free the ball from the ensuing melee into the path of Adam Forde who tapped into the empty net.
Parity was restored by the homesters a minute later, Pollok custodian Jordan Longmuir?s weak punch falling to the feet of Ryan McChesney who gratefully accepted.
Glenafton?s best chance after the interval came from Jamie McKernon?s flag kick which Longmuir did well to paw away from underneath his crossbar.
Longmuir?s opposite number, Brian McGarrity, pulled off the save of the match to keep the scores level, springing across to deny Forde?s acrobatic scissor kick, before Del Hepburn placed a shot off the upright.
McGarrity was fortunate moments later when he was beaten in an aerial duel by Stuart McCann, Gentles ruling the ?Lok substitute?s challenge unfair as the ball nestled in the net.
The final action came in the last minute of regulation time, Hepburn?s run towards the box was unceremoniously halted by McChesney, the Glenafton goalscorer joining team-mate Gray in the early bath. 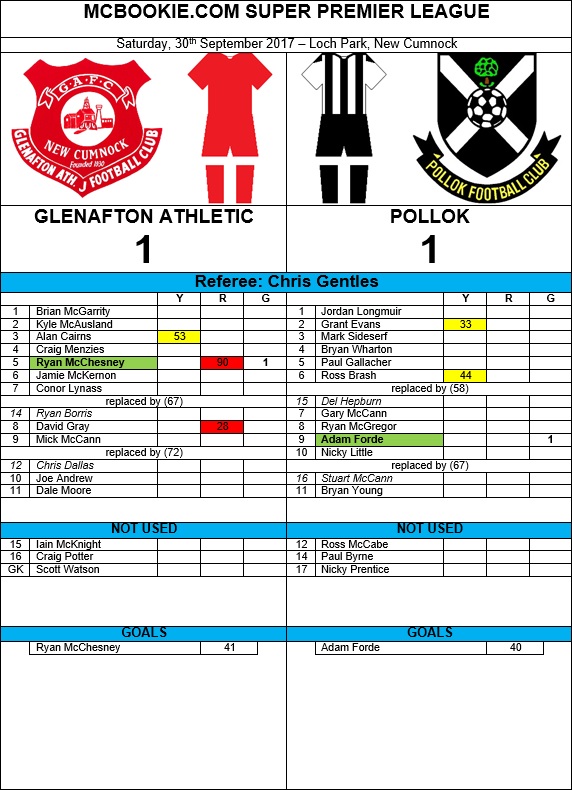 That’s it – all over. Another draw for the Lok.

90 mins: Glens go down to 9 men as their goalscorer is sent off.

60 mins: Del Hepburn is brought off the bench to replace Ross Brash.

41 mins: GOAL!! The lead doesn’t last long as Glens get back on level terms.

40 mins: GOAL!! Lok take the lead through Adam Forde, his fifth goal for the club in his 11th appearance.

Glenafton’s results so far this season: In charge today is Glasgow association referee Chris Gentles (Cat 2D). He was in charge of last week’s Scottish Cup tie between Lothian Thistle Hutchison Vale and Inverurie Loco Works. The only West SUper match he has done so far this season was Kilwinning’s clash with Clydebank in August.