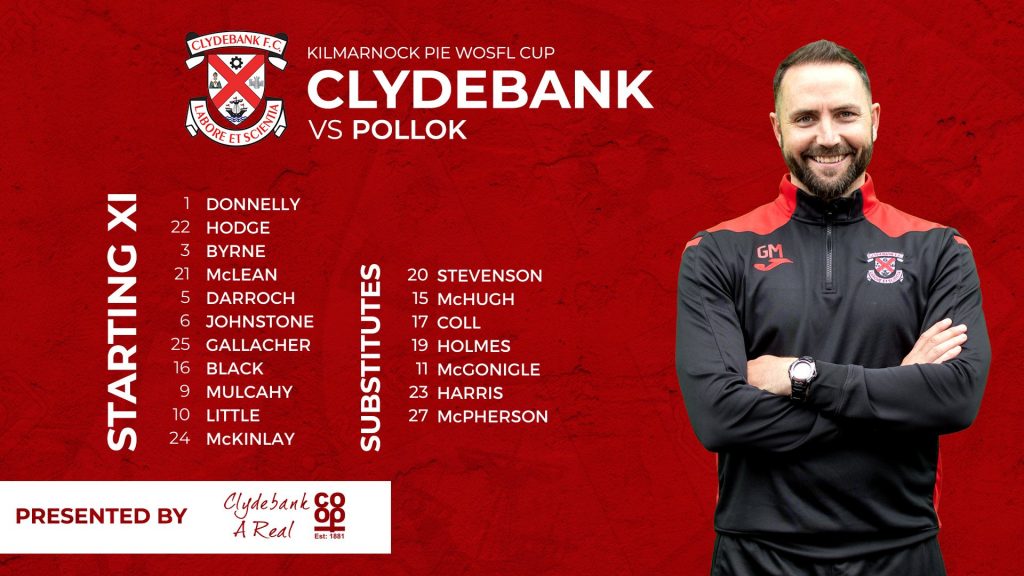 Pollok visit Holm Park on Saturday to face Clydebank in an all WoSFL Premier Division South Challenge Cup match up.

The ‘Lok’s fine run of results continued last week at Newlandsfield with a 1-0 win over Benburb as we maintained our 11 point lead in the league.

Clydebank’s league match away to Largs was postponed due to the weather. The Bankies have been busy recently with their Scottish Cup exploits which came to an end after an extra time loss to Annan Athletic, after they had dispatched Dalkeith, Elgin City and Clyde on their way to the Fourth round. They have proved to be a good Cup team recently.

In the league Clydebank are fourth with a record of 14 wins, 6 draws and 6 defeats from their 26 matches played.

Pollok have a good recent record against Clydebank, the Bankies last win coming in the Central League Cup back in 2017. Last time out Pollok left Holm Park with all three points after a 2-0 win in the Premier Division on Septmeber 4th last year. Josh Weir had put the ‘Lok in front and a last minute Adam Forde strike sealed the win. That was our 4th win in a row at Holm Park.

For the second weekend in a row Pollok faced opposition close to them in the league table. And it was no surprise that the team that took to the field at Holm Park to play Clydebank was unchanged from the terrific performance against Darvel. The home side were looking to stretch an impressive unbeaten start in the league to thirteen matches.

Pollok were the first to threaten when a half cleared free-kick fell to Wharton at the edge of the box. His low strike through a crowd of bodies was gathered at the second attempt by Stevenson in the home goal.

Clydebank wasted a glorious chance when McKinlay beat the offside trap but could only slide his shot wide of the post when left with just Longmuir to beat. The Pollok goalie was called in to action minutes later when comfortably holding a hooked shot from Little.

Just after the midway point of the first half Pollok took the lead. A powerful header out of defence by Sideserf found Grant on the right wing. His pass in behind the Bankies’ defence was weighted to perfection and Weir drove home a sweetly struck shot from a tight angle.

Pollok did not sit back on their lead and chances continued to be created. A Weir cross had no takers, then Fraser had Stevenson at full stretch with a shot from the edge of the box before Weir headed wide from six yards with the goal at his mercy.

The second half started with Longmuir diving full length to touch a free-kick wide of the post. At the other end Weir used his pace to once again get in behind the defence and when his first shot was saved his second attempt was heading in before the timely intervention of Owens to clear off the line.

Then in the fiftieth minute came the game’s flashpoint. Fraser went down and Johnstone made it clear he felt Fraser had dived. Some of the home side stopped playing to complain to the referee despite the fact they were building a promising attack. The referee stopped the game and consulted with his assistant who advised that Johnstone be shown the red card. A strange outcome for an incident where no-one appeared to touch anyone and the red card was indeed rescinded on appeal later in the week.

Despite being down to ten men the home side were able to exert more control over the game and saw one headed chance go wide and another spectacularly tipped over the bar as Longmuir showed great reflexes. At the other end Weir did well to wriggle his way past a couple of defenders in the box to create a shooting opportunity but he blazed over.

Both keepers continued to be called into action with chances squandered at both ends. Just as it looked like there would only be one goal in the game a long ball out of defence by Longmuir was superbly flicked on by McCann to his fellow substitute Forde. He made a yard of space for himself before curling a left foot strike from twenty yards into the bottom corner.

The Southsiders went home with a well merited three points after another disciplined, hard-working and controlled team performance.

It’s another big weekend in the West Of Scotland Football League Premier Division. Not only are Pollok travelling to face second place Clydebank but it’s also the National Lottery Weekend where fans can gain two for one entry to all Premier Divisions game if they have a valid Lottery ticket for Saturdays draw.

Last weekend saw Pollok pick up a crucial three points at Newlandsfield in a hard fought encounter with Darvel, Josh Weir with the only goal of the game. We now take on a Clydebank team that have been in fine form this season.

Clydebank beat Bonnyton Thistle 4-1 down in Kilmarnock last weekend to remain unbeaten in the league, the Bankies currently have a record of 8 wins, 4 draws, 31 goals scored with 14 conceded. They sit a point off of leaders Auchinleck Talbot. The Clydebank goalscorers last week were a double for Hamish McKinlay, Nicky Little and Joe Slattery.

Clydebank joined the junior ranks in 2003 as fans secured the rights to the former Senior team Clydebank’s name and badge, after the senior team were bought over by Airdire United, since becoming Airdrieonians. Bankies fans will be hoping Gordon Moffat can lead them back to SPFL football following in the footsteps of their now defunct senior club.

Clydebank had participated in last seasons Premier Division before it was declared null and void and were leading after seven games. They reached the Scottish Junior Cup Final in 2009, going down to Talbot.

The last meeting of the clubs took place at Holm Park on 4th March 2020, when goals from Gary and Stuart McCann, Adam Forde and Iain Russel saw ‘The Lok’ leave with a 4-1 win. 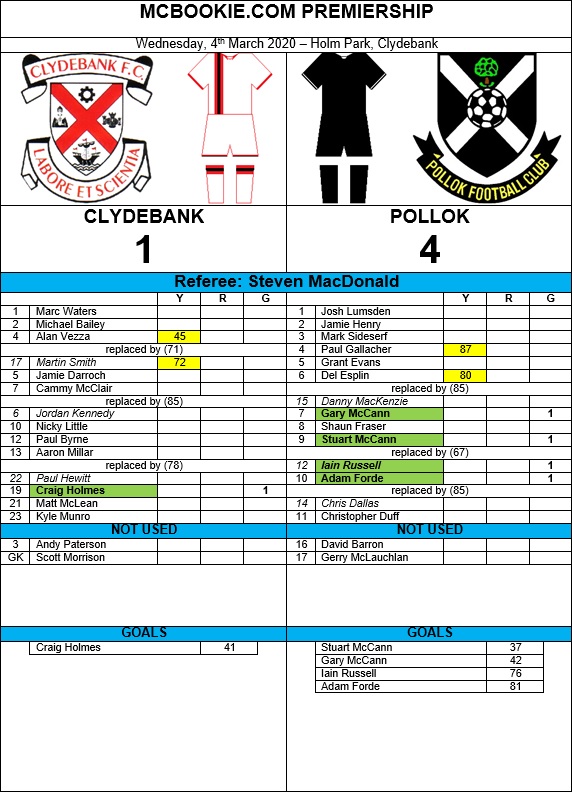 Supporters travelling from Glasgow by car should exit the city in a north-westerly direction on the Clydeside Expressway past the SECC. Follow signs for the A814 (Clydebank) for approx 6 miles. As you cross the boundary from Glasgow into Clydebank, the ground is situated around 100 yards past the Shell Service station on the left hand side.

A number of services operate from Glasgow Central to Yoker which is a 5 minute walk from Holm Park. Check up to date train times on the Scotrail website

FirstGlasgow run several buses to Clydebank with the number 1 service stopping right outside the ground. Up to date timetables can be found on First Glasgow’s website. 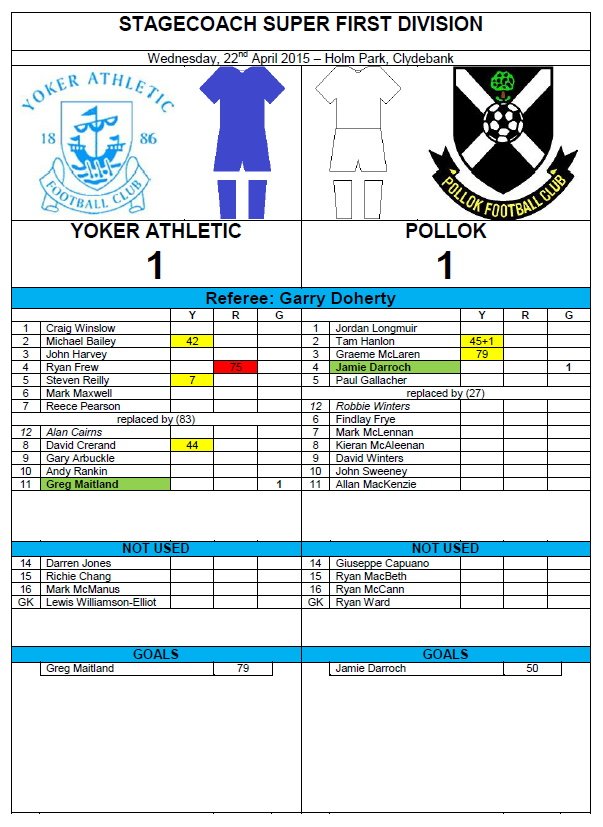