All the highlights from Mark Donnelly: 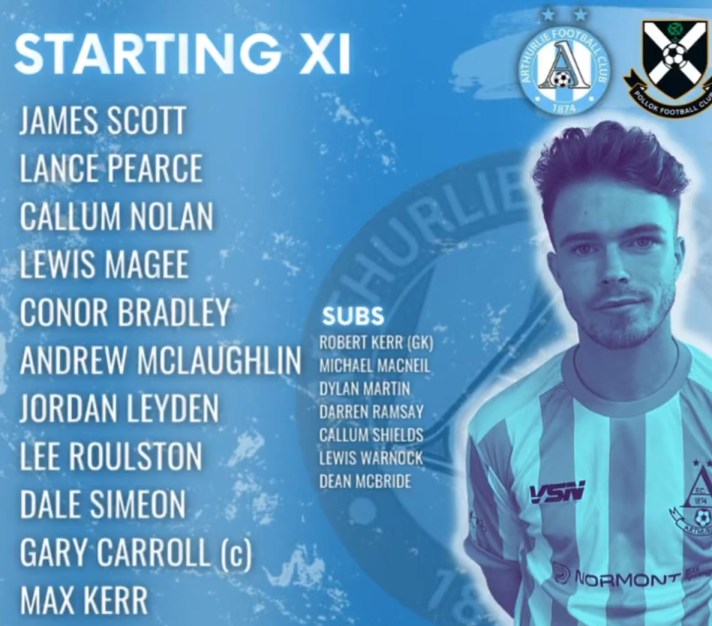 19′ GOAL Arthurlie take the lead from the penalty spot, 1-0

Adam Forde continued his rich vein of goalscoring form scoring what proved to be the winner of a bitterly cold Southside Derby on Saturday against Arthurlie at Dunterlie Park.

Arthurlie had the first real opportunity of the match as Blakey stung the palms of Lok goalie Jordan Longmuir with a curling free kick destined for the top right corner from around 25 yards out. Bohme was next to test the Lok keeper after being played through by a Mick Daly flick on, however the midfielder panicked and lashed his shot to the left for a goal kick from 25 yards. Pollok’s first golden chance fell to Stefan McCluskey who must have thought he had scored after some good interplay between Nicky Little and Gary McCann down the right. McCann proceeded to cross it perfectly to McCluskey who fluffed his lines from six yards out, with theball dribbling past the right hand post. Adam Forde scored his 4th goal in 6 matches after Nicky Little fed in Bryan Young down the left hand side, with the wideman drilling a ball into the box, evading the heads of the Arthurlie defence and an incoming McCluskey for Adam Forde to delay his run in at the back post, re-position his body off balance and connect with the ball sending it back the way it came into the bottom corner with a looping header to make it 1-0 with 20 minutes played.

Ryan MacGregor thought he had scored a second for Pollok on the hour mark however his cross goal header was ruled out for an alleged push on the Arthurlie defender. Forde had another chance just after the hour mark, with Young floating a diagonal ball from the right into the box for it to land perfectly on Forde’s left foot, only for the youngster to fire over with a fizzing volley. Minutes later having a header palmed over from point blank range after a good cross from the left hand side.

Tony McInally said ” I thought we won the game well, however despite being the more dominant side if we had taken our clear cut chances we would’ve won more convincingly. Saying that im delighted for the group getting another league win taking us into third and hopefully the supporters enjoyed another derby win over Arthurlie.” The goals from Davie Brown: