Pollok travelled to Buffs Park to meet Kilwinning Rangers in their 31st league game of the season. The sun was shining in North Ayrshire as spring arrived.

With McGregor unavailable there was the usual re-jig of the central defensive positions with Menzies and Brownlie back in the starting line-up and Wharton taking a place on the bench.

Pollok kicked off and immediately went on the attack. Grant did well to get his cross into the box from near the corner flag and although it was initially cleared when the ball was played forward again McCann was fouled on the edge of the box. Forde hit the wall with the free-kick but passed the rebound out wide to Lyon whose low cross was brilliantly dealt with by Kilwinning’s centre half in putting it past the post when an own goal was a distinct possibility. That unfortunately was about as good as it got for the league leaders.

In the 6th minute hesitancy in the Pollok rear-guard saw Kilwinning get into a dangerous position in the box. Longmuir dived at the striker’s feet and although he seemed to get plenty of the ball he also got the man. The referee deemed it a penalty. Collins stepped up and coolly sent Longmuir the wrong way to give the hosts an early lead.

Kilwinning passed up two great chances to extend their lead with shots which missed the target and then came even closer with two efforts which hit the right hand post. A further chance came and went when Longmuir punched under pressure and was relieved to see the ball go wide as the striker took a shot on the turn as Longmuir scrambled back to his goal-line.

Very little had been seen of Pollok as an attacking force and it took until a minute before half time before they managed a shot on target. Grant’s long range effort being comfortably saved by Barclay. Kilwinning then went up the park and hit the woodwork for a third time in the opening period – a lob over Longmuir coming back off the bar. As they trudged off for half time the away side could consider themselves fortunate to still be in the game.

The change in ends did little to change the flow of the game in the second half with the home side continuing to look by far the more dangerous. A break in the 52nd minute saw Kilwinning in a great position and as the Pollok defence backed off the striker took aim from 20 yards. Longmuir managed to keep it out with a diving stop to his right. Minutes later a shot from virtually the exact same spot was repelled once again by Longmuir tipping it round the post. Although the resulting corner was initially cleared the ball was swung back in and Kilwinning’s headed attempt went inches wide.

Just before the hour mark Grant was hauled down when making progress on the right flank. The free-kick was swung into the box and Stuart McCann’s header came cannoning off the bar. It was to be the closest Pollok would come to a goal.

After a ten minute delay whilst a medical emergency was dealt with by the two physios – thankfully the recipient of the treatment was ok – it was Kilwinning who resumed looking the sharper. A quick break saw the play switched to the left. When the Kilwinning striker cut inside Wharton he let fly with a shot from the edge of the box. Longmuir saw it all the way but made a rare error in letting the ball come back off him and Ramsay was there to snap up the rebound. The game then fizzled out as Kilwinning were content to sit on their merited two goal lead. 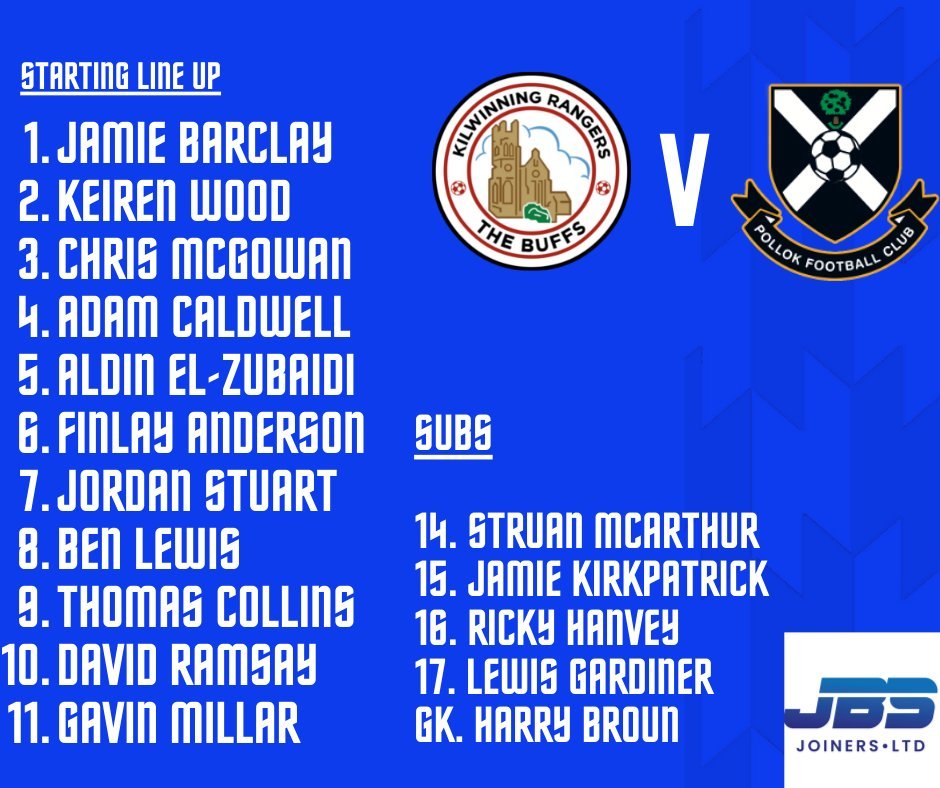 Pollok are back on their travels to Ayrshire this week, with a trip to Buffs Park as we face 4th placed Kilwinning Rangers in the West Of Scotland Premier Division.

Last week, Kilbirnie came to Newlandsfield but left empty handed after the ‘lok won 3-1, goals from Stuart McCann, Adam Forde and Gary McCann sealed the win. Adam Forde and Stuart McCann are fighting between them to see who finishes top of the clubs scoring chart, Forde currently leads the way with 19, with McCann four goals less.

The Buffs have played twice in the past week, last Saturday they went down 1-0 at home to Clydebank and then midweek they were beaten 3-1 at Auchinleck Talbot. They currently find themselves 4th in the table with a record of 15 wins, 9 draws and 8 defeats, with a points tally of 54. Kilwinning will be hoping to get back to winning ways for the first time since the 5th of February when they beat Rutherglen, two draws and four defeats followed that win.

Pollok have a good record in recent games with Kilwinning, in the last five games, Pollok have won four with Kilwinning winning the other. The last time both clubs played was at Newlandsfield on September 18th, last year. Pollok won 2-1, with goals from Stuart McCann and Chris Duff with the late winner.

This weekends match is part of The National Lottery Football Weekend, buy a match ticket and get one free if you have a valid Lottery ticket. Take a pal to the game, make sure you remember to take your Lottery ticket with you!