Skip to content
Highlights from Mark Donnelly:
Just the goals from Mark Donnelly:
The manager’s post match POV:
Pollok make the trip to Barrfields Park, to face Largs Thistle in a WoSFL Premier Division match on Saturday.
Last week, saw the ‘Lok leave Blantyre with all three points after a 1-0 win, courtesy of a 45th minute Stuart McCann goal that helped Pollok go eight points clear at the top of the league, albeit having played four games more than Auchinleck.
Largs were also on their travels last week, when they went down 4-2 away to Cumnock, that was Thistle’s first defeat in six games in all competitions. Largs currently sit 13th in the Premier Division, with 8 wins, 4 draws and 10 defeats, with a points total of 28.
Formed in 1889, Largs have been managed by Stuart Davidson since 2016. Their biggest achievement so far in the game was in 1994 when they won the Scottish Junior cup against Glenafton.
Pollok are unbeaten in the last seven matches against Largs, with the last match between the sides finishing all square. On August 18th last year, Largs came to Newlandsfield and scored a late equaliser through McGinty to level the score 1-1, after Matty Grant had put the ‘Lok ahead on the 77th minute.

Pollok headed to the seaside for match day six of the McBookie West Premiership and a game against Largs Thistle. The players took to the artificial surface in bright sunshine as the fans soaked up some rays.

Pollok started the game on the front foot with Boyle seeing a couple of efforts blocked as Largs struggled to deal with a series of corners and crosses.

One ball that had the Largs defence turned was rather needlessly hammered, not only out of play, but out of the ground and into someone?s back garden. This left the Largs designated ball retriever none too pleased as he trotted off to ring someone?s doorbell to ask ?can we have our ball back??

With twenty minutes on the clock a goal kick from Lumsden was headed then deflected by the Largs defence in to the path of Forde. He got his head to the ball just before the keeper crashed in to him. The referee had no hesitation in pointing to the spot and Shaun Fraser stepped up to calmly knock the ball into the bottom left hand corner to give Pollok a merited lead.

Pollok continued to have the better possession although few clear-cut chances were being created. Esplin was booked for persistent fouling as the teams competed for midfield supremacy. Before halftime McCann had a header saved by the keeper and a Boyle header back across goal was just too high for Forde at the back post.

In the forty ninth minute the Largs keeper clutched a Pollok free kick and launched a quick kick down the field. Sideserf tried to head it back to Lumsden but was short with it and Ben Black nipped in to take it round the keeper and slot home from an acute angle. Largs had their equaliser and it was game on.

Seven minutes later Pollok regained their lead. Largs didn?t manage to fully clear a Pollok attack down the middle and when it was fed back in the ball was played to Fraser who showed neat control before twisting and turning the Largs defence looking for a yard of space. Once he found the space his right foot shot found the far corner with unerring accuracy.

Pollok looked to extend their lead as Forde got an overhead kick on target and then a great switch of play by Esplin allowed Duff to cut in from the left but his shot whizzed narrowly wide. At the other end Lumsden produced a flying save to keep out a Largs? header.

Barron replaced McCann as Pollok looked to shore it up in the last ten minutes. The sub certainly had an impact ? putting in a thundering challenge to stop a dangerous looking Largs attack and then producing a sublime ball down the right wing which put Fraser away and clear. Only Jamie Henry managed to get up in support but between the two of them they couldn?t quite find the shot at goal which would have killed the game.

Largs had one more close thing in the dying minutes ? a shot flashed across the goal with Lumsden seemingly beaten but it went wide of the back post. Pollok had run out narrow but deserved winners against a determined, committed and vocal Largs team. Man of the match Shaun Fraser had put in a complete midfield performance. Helping in defence and attack with tackles and passes. His ball retention was superb and he?d capped it all off with two goals. Peter Thomson

A Shaun FRASER penalty has Lok ahead in 21 minutes, his 9th goal of the season! 61 mins gone and Largs have gone 3-2 up through Graham Muir.

Second half is underway.

And Lok have turned it around! 2-1! Danny Boyle with the goal! 1st half highlights from Davie Brown:

2nd half highlights from Davie Brown: 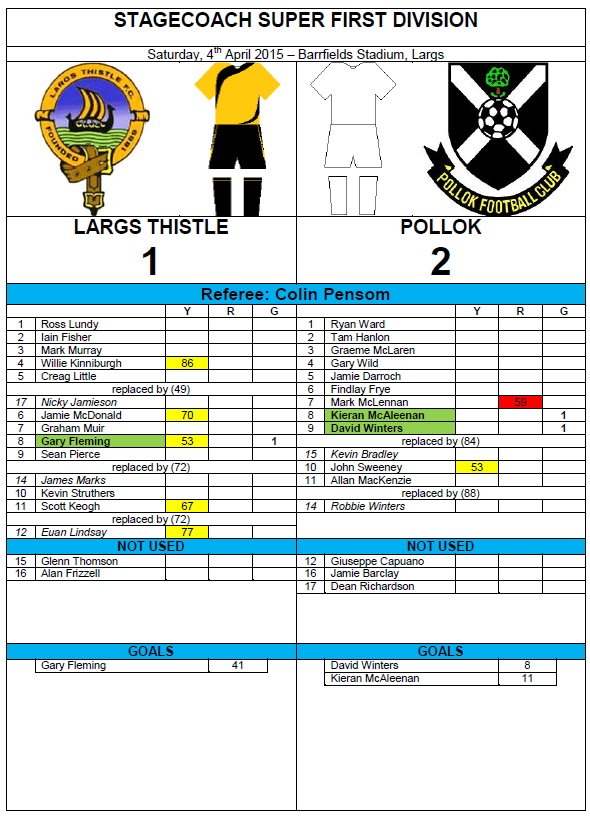