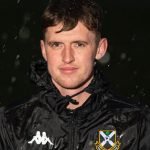 Pollok FC are delighted to announce the signing of former Scotland youth international midfielder, Dylan Dykes from West of Scotland Conference B side, St.Cadoc’s.

Dykes started off his career as a youth with Rangers, then signing professionally for the Ibrox side in 2012 as they worked their way up the divisions following the events of 2011-12’s close season. Like then-team-mate David Brownlie, he transferred to Ross County for season 2016-17 where he was part of Stuart Kettlewell’s development league winning side. He made two appearances off the bench in the top flight (his professional debut coming in the Highland derby with Inverness Caley Thistle on 28/4/17) before spending 2017-18 on loan at Stranraer.

He had a calendar year at Morton from January 2019 to January 2020 that culminated with another loan spell, this time at Stenhousemuir for the first half of the 2019-20 season, spending the second half on the books of Cumbernauld Colts after his Cappielow release.

St. Cadoc’s picked him up for 2020-21 and it is from the McKenna Park side that Lok secured him.

Speaking to pollokfc.com, Lok boss Murdie MacKinnon had the following to say;

I am thrilled to have the opportunity to work with Dylan again. We previously worked together during our time at Rangers, so I know that Dylan has real quality.

He will bring an added boost to the squad and club by showing the quality that he has in the attacking areas of the pitch. Dylan has great ability on the ball and has a very good record of scoring goals from midfield.

Dylan will be a fantastic player for Pollok as we move forward.

Dylan was equally upbeat on joining up with his new team;

“There’s a really good squad here and I’m just looking forward to getting involved. We’re still in the hunt for some trophies and I’ll do my best to help the club compete for them.”