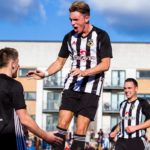 Murdie’s plans for season 2019-20 took another step forward this evening as brothers Gary and Stuart McCann signed contract extensions to carry them through until summer 2020.

Scotland international Gary, signed for Pollok in 2016 and has so far made 94 appearances (90 starts, 4 sub) in the black and white of Pollok, scoring 22 goals and creating many more.

Stuart joined the club a year later and quickly cemented his place in the team. He has so far contributed 26 goals in 69 appearances (57 starts, 12 sub). Alongside Jordan Longmuir and Danny Boyle, he has played most minutes for Pollok this season.