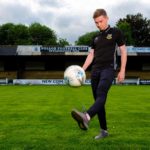 Pollok are delighted to confirm the signing of Del Esplin. The energetic midfielder has spent the last season with Rutherglen Glencairn where he helped them win promotion to the West Premiership and picked up their Players Player of the Year award.

After starting his career with Rutherglen, Del spent three years at Cumnock before heading back to the burgh of Rutherglen in 2018.

After strengthening his squad further, the manager had the following thoughts on his new player;

“Del is a proper box to box central midfielder with plenty of energy. He’s excellent on the ball and gets on the scoresheet a decent amount too. He’s another good addition to the squad.”