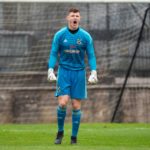 The club are delighted to confirm that ex-Clydebank goalkeeper Josh Lumsden has signed up on a permanent deal. Josh impressed as a trialist towards the end of last season making 5 appearances between the sticks and will join up with the rest of the squad for pre-season training. Welcome to Pollok, Josh!

We can also announce that forward Stefan McCluskey has left the club to sign for Dumbarton in the Scottish League 1. It is the third time he has linked up with Sons gaffer, Jim Duffy. Stef made 54 appearances in his two seasons at Pollok scoring an impressive 27 goals.

Also leaving the club at the end of their contracts are Ross Brash, Colin Williamson ?keeper Scott Johnson and Bryan Young who has retired from football.

We wish all departing players all the very best for the future. 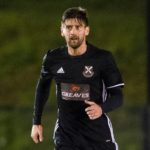 The club are delighted to announce that midfielders Ross Brash and Ryan McGregor are the latest players to extend their stay at Newlandsfield into the 2018-19 season.

Ross Brash joined Pollok last summer from Hurlford Utd and has made 20 appearances scoring 2 goals this term. Ross was also part of the Pollok quartet who represented Scotland in the Umbro Quadrangular tournament playing in all three internationals and scoring a last minute winner against Ireland.

Pollok’s international contingent were amongst the goals last night as the Scottish Junior national team rounded off their warm up program ahead of next weeks Umbro tournament with a 7-0 win against Renfrew.

Midfielder Bryan Young wore the captains armband for the international side as fellow midfielders Ross Brash and Gary McCann also started the match for Scotland. Mark Sideserf was named on the substitutes bench.

A first half Ross Brash header to put Scotland 2-0 up was later followed in the second half by another header, this time by Bryan Young, which put the Scots 5-0 up. Gary McCann capped off a fine display with a curling effort in the 88th minute.

The Umbro tournament featuring Scotland, Northern Ireland, Republic of Ireland and the Isle of Man starts next Wednesday with a programme of 3 games over 4 days. Scotland’s final match against the Isle of Man will take place at Newlandsfield on Saturday 14th October with a 2:30pm kick off.

The full list of fixtures and venues are as follows;

Three ‘lok players were involved in Scotland’s first warm up match last night for the forthcoming Quadrangular Tournament. Mark Sideserf and Bryan Young both started the match whilst Gary McCann made an appearance as a second half substitute, replacing Clydebank’s Phil Johnston at half time. Ross Brash is also in the squad.

The match, against Linlithgow Rose, finished 5-1 to the national team. Although the Pollok contingent were not amongst the scorers, Bryan Young assisted the first two goals for Talbot’s Graham Wilson. Dean Hoskins (Bonnyrigg), Nicky Docherty and David McKenna (both Beith) completed the scoring for Scotland with Blair Batchelor getting the Linlithgow goal.

The national team will continue their preparations with a match against Renfrew on October 4th. The Quadrangular tournament takes place between the 11th and 14th of October.

The tournament takes place in Glasgow between the dates of October 11th-14th 2017.

Congratulations from all at Pollok to Mark, Bryan, Ross and Gary!

The national squad will play a warm up against Linlithgow Rose on September 20th.