The southside’s newest roving reporter, Mick Kane, caught up with long-serving defender Grant Evans to talk about how life has been treating him under lockdown, a return to football action and his thoughts on the new seasons set up.

Grant Evans signed for his local club back in 2016, and has so far made 87 appearances for Pollok, scoring 3 goals. Despite being a tough tackler, Evans shows us a different side in our latest interview as he discusses mental health awareness.

“It’s been alright,” Evans said about life under lockdown. “Obviously been tough for everyone. I’ve worked through most of it, only had three weeks off during it, so that’s kept me busy.

“I think its been tough with no football, a lot of the boys have been suffering, just missing the changing room, the banter, getting together and the fitness as well. You see it everywhere, everybody out doing their 5k’s, running but you can’t beat the football, the competitiveness. The sooner it comes back the better.”

As the lockdown restrictions are beginning to be lifted more and more, football seems set to return sooner rather than later for the lower leagues.

“As far as I have heard, going to be back in (training) August at some point.” Evans said. “Speaking to the manager, Murdie was saying start off a couple of nights a week to get the boys back into it, as its still quite a while away from playing games. Don’t want to get everyone back too early.

As Evans mentioned, wellbeing of the players is important and that includes their mental health wellbeing, which could be taking a hit under the lockdown restrictions.

“I think everybody suffers from kind of mental health issues,” Evans explained. “Whether its a wee bit of anxiety, getting down now and again. Think a lot of folk (will be struggling) maybe living themselves, all ages and I think everyone will be suffering just now.

“I was saying to the manager the other day, there’s a lot of guys come to watch junior football. You go to a lot of the grounds , a lot of them are older. That’s what they look forward to all week, that’s there day out. Come down watch the game, go to the pub after the game, have a wee talk about it, whether iys a good or bad result. Probably be slagging me!

“I think everyone is suffering, I think kids are suffering being cooped up all the time. Personally its been hard as well. Nothing to do on your days off, trying to keep yourself ticking over, running. Keeping fit is a great way of keeping your mental health in check. Not being able to do that, not being able to interact with the boys has been difficult. I think if everyone starts opening up a wee bit, talking to each other then that goes a long way to help. I think everyone is more aware about it now, you see a lot of clubs getting involved in stuff like that and its encouraging to see.”

Football can often seem a tough macho environment where opening up about problems is not the done thing, Evans agrees.

“Definitely, its not easy. Football always been seen as a butch sport. Its not easy for people opening up. I’m not saying everybody has issues but I suffer from anxiety and I think a lot of people do. Its about communicating, talking and just opening up. Then you see others and you realise you’re not the only one. You speak to the guy next to you, ‘oh aye, I get that as well.’ I think its important. I’ve always been quite open about it. I don’t suffer really bad from it but I do. Times like this its not great.”

Lockdown brought an early end to the West junior leagues as the creation of the new West of Scotland Football League came into being. What expectations does Evans have of the new league?

“Can’t complain you don’t have football then football comes back, you have too much! Its important there was a change as a lot of teams were getting stagnant, lots of teams wanting to progress. A lot of teams are spending money, bringing in big players so they are going for it. Looking forward to it.”

With rumours that seven teams could be relegated there is no doubt the league will be competitive.

“Seven down to trim the league, going to be difficult.” Evans said. “If you are in a dogfight, finish seventh from bottom, you think you have done alright but your getting relegated. Going to be really tough. Its going to be tough for us, lot of competitive teams, we will be looking at the top of the table. There’s a lot of teams strengthening, Talbot, the usual, Darvel, Beith, Glenafton, usually a surprise team comes up. Going to be really competitive and interesting.”

With Pollok now having a potential route into SPFL football, we could be in for an interesting few years ahead.

“At the start I was like, the big junior teams like to compete for stuff evey year, the league, the cups. I just thought you go into the Lowland its going to be so hard to go up then to get into the leagues.” Evans explained. “But now that I’ve sat back and read up on it, looked at other teams, peoples opinions and perspectives on it, its exciting. Obviously a long way away but imagine in ten years time, Pollok in the SPFL leagues. Its exciting.”

Evans ended by saying what he hopes for the season ahead.

“Hopefully be up there challenging, stay injury free. See how we go.” 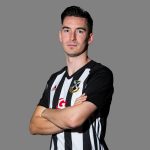 Pollok are pleased to confirm that Grant Evans has penned a new contract to stay at Newlandsfield until summer 2021.

The versatile defender, signed from Irvine Meadow, has been at the club for four seasons making 87 appearances. Grant has played across all four top senior divisions so far in his career with spells at Hamilton, Dumbarton, Greenock Morton and Airdrie.

Speaking about the latest addition to his back line, Murdie MacKinnon had the following to say;

I am delighted that Grant has extended his stay with us. Grant and I go way back to our time at Hamilton Accies where we worked together in the early days of my coaching and his playing career. Since then, he has developed into a terrific player and has shown this on many occasions since joining Pollok FC. Most importantly, he is a winner. I know he wants to win every time he steps onto a pitch whether it be for training or games.

Grant is a player with great experience in both the junior and senior game and I am sure that this will be a huge advantage to us as we move forward into this exciting new chapter in the clubs history.

Meanwhile, our Donate a Ticket page is still up and running. All funds go directly to the club and they are especially appreciated at a time when our main source of income (gate receipts) is not available. If you are able, any donation is welcome.
Donate here – https://donateaticket.com/scottish-cup/newburgh-juniors-vs-pollok-fc-r1/ 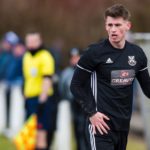 Defenders Grant Evans and Mark Sideserf have become the latest players to commit to Pollok for season 2018-2019. They join Gary and Stuart McCann who agreed to extend their Newlandsfield stay last week.

Mark signed for Pollok in the summer of 2015 from Irvine Meadow and has made 98 appearances, scoring 13 goals. He was called up and represented the Scottish Junior national team in October’s Quadrangular tournament.

Grant, who will join us for his 3rd season at the club has so far made 43 appearances in the black and white of Pollok.