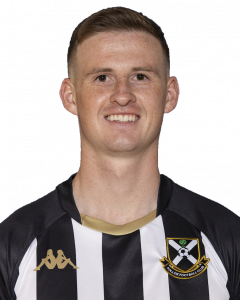 Son of former footballer Willie (ex Kilmarnock, Stirling Albion and Maryhill among others), 24-year-old winger Ryan arrives at Newlandsfield after a meandering, twisting and turning cross-border transfer from Longridge Town of the North West Counties League. Ryan dipped his toe into the football world on the books of Motherwell, signing professionally with them in 2014 though drifted on to St. Mirren thereafter in February 2017. Ryan’s first taste of first team action came after climbing aboard at Albion Rovers, making 21 league appearances for them – ironically his only senior goals to date were a brace against Stirling Albion where his father was a legend. He ventured forth to Stenhousemuir for the latter half of season 2018-19 and played 15 times for them across the two and a half years a Warrior, much of that Covid-hit, of course. In August 2021, he tried his luck south of the border on the banks of the Mersey with Widnes, then of the Northern Premier League West, though moved on to Longridge Town in November 2021.