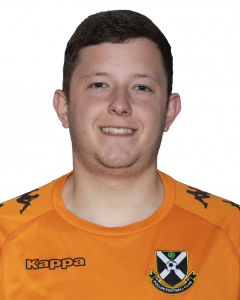 Ross joined Pollok’s Development side in July 2020. Ross, or Shawzy as he is known, is actually a recent addition to the “goalkeepers union”, ending up in goal when a team-mate failed to show for a game – and the rest, they say, is history! Ross counts Renton Craigandro, Erskine Youth, Dumbarton United, Linwood Rangers and Vale of Leven among his clubs, and last season was with BSC Glasgow. Despite his age, he made it onto the bench for a game away to Berwick Rangers in November 2019. He also played up front for the U20s in a cup tie during 2021-22. Ross signed his first professional contract with the club in June 2022. Ross joined Vale of Leven on loan in September 2022.