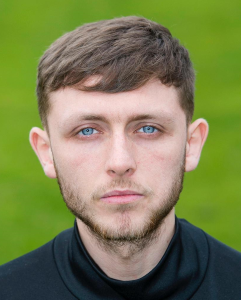 Following a few trialist appearances, striker Mikey signed for Pollok in October 2018 on a delayed transfer from the Pollok United Soccer Academy’s 21s whom he had joined towards the end of last season. Prior to that, he spent most of 2017-18 turning out for Clyde on a trial basis while also signed up to Vale of Clyde 19s, with his earlier clubs featuring Hamilton Accies and Rutherglen Glencairn Juniors YFC among others. In February 2019 he became a permanent addition to the Lok playing staff, signing through to the end of 2019-20, though was immediately loaned out to Ashfield on a short-term basis. In August 2019, Mikey was loaned to Petershill, also on a short-term basis and then in September 2019, he joined Shotts, also on loan, initually until the end of December 2019 but this was extended to March 2020. Mikey departed for Rossvale at the conclusion of the 2019-20 season.