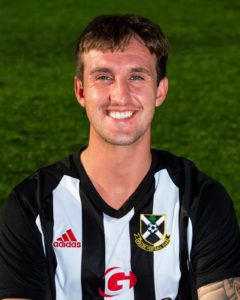 Jordan played as a trialist for Lok on a few occasions following his release by Cambuslang Rangers before signing for the club in March 2019 on a deal through to the end of 2019-20.

He came through the youth system at Clyde but at 16 signed up with Hearts where he remained for four seasons. His only top team action for the Jambos was against Auchinleck Talbot in the Scottish Cup in 2011-12. He had a loan spell at Cowdenbeath then signed for Championship-level Livingston for 2012-13. At the end of his sole seaon at Livi, he made the permanent switch to Cowden and after one season there, headed off to Europe to sign up with Lokomotiv Plovdiv in Bulgaria.He returned to Scotland in February 2015 to join Airdrie, spent time loaned to Annan in his second season a Diamond, and in 2016 began his junior career which to date has taken in Shettleston, Cumnock, Lang and now Lok. Jordan left Pollok at the conclusion of the 2019-20 season and signed for Troon.