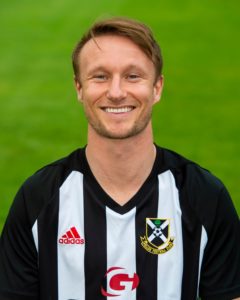 Vastly experienced forward Iain, originally from Annan, joined Lok on a two year deal in the summer of 2019. He began his career as a schoolboy on the books of Rangers, signing professionally for the Ibrox side aged 16. He never made a league appearance for Rangers and departed for Motherwell in 2002 where he made 5 sub appearances for the Well in the top flight. Regular football came to Iain when he joined 3rd tier Dumbarton 6 months later, and he found the net 33 times for the Sons in his first spell there. He honed his reputation for finding the back of the net with a switch to fellow League One side Brechin, netted 21 times for them in 2006-07. Those goalscoring exploits landed him a switch to Morton, though despite featuring regularly for the Championship side for the first two seasons, he spent his final year at Cappielow mostly out on loan back at L1 level. Livingston snapped him up for the 2010-11 L1 campaign and he helped them to promotion with 22 goals. He added the same and more in his two Championship years at Livi then 32 for Queen of the South over three seasons back in his home county. Airdrie became his tenth club in 2016, and he rewarded the Diamonds with 18 goals, though at the end of that season, with a year on his contract, he hung up his boots. Dumbarton coaxed him out of retirement in January 2018 and he remained there for 18 months before his summer 2019 transfer to Lok. He spent the Covid-hit season on loan at Cowdenbeath before announcing his retirement in the summer of 2021.