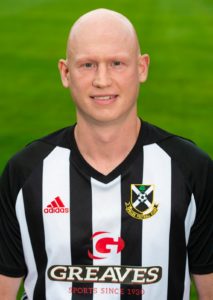 Central defender Gerry joined Lok in 2019 after a long senior career that stretched back to making his debut for Hamilton Accies as a 17 year old on 16th September 2006. He had in the main season long stints at clubs such as Stranraer, Ayr United and Cowdenbeath, with longer spells at Queen of the South and especially Brechin City where he remained for five years. In total, Gerry played over 250 league games in what is now the SPFL. Gerry’s father, also Gerry, was on the Lok management team in the early 1990s. Gerry departed Lok for Brechin City in January 2021.