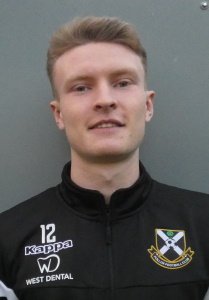 Douglas joined Pollok’s Development side in July 2020. Douglas is a midfielder and is one of the players stepping up from Pollok United 19s. He counts St. Cadoc’s and Stamperland YFC as clubs he was with prior to signing up with PUSA in 2017. Despite being an ’01, Douglas has played much of his career with 2000-aged teammates, punching above his weight, and in 2019-20, helped the 21s to promotion in the West of Scotland League at the first time of asking. He can play a variety of roles, from central defence to defensive midfield to an overlapping full back, and gets in among the goals as well. Douglas is currently a law student at Strathclyde University. Douglas left Pollok at the end of curtailed season 2020-21.