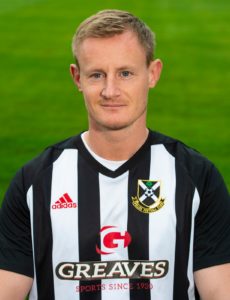 Chris transferred to Pollok from Glenafton Athletic in July 2019, signing for the club on two year contract. He began his Junior career with Darvel, and stayed with the Recreation Park side for three seasons. He then moved to hometown side East Kilbride Thistle before switching to Arthurlie. His form there won him a move into Senior football with Albion Rovers and over his time there, he netted 11 times in 40 league appearances. He was then loaned back to Arthurlie, with that move becoming permanent in January 2015. Glenafton then picked him up from the ‘Lie a year later, with his move to Pollok coming two and a half years later. Following the curtailment of the 19-20 season and the decision by Lok to withdraw from 20-21, he was transferred to St. Cadoc’s.