After reaching the semi-finals of the 2019/20 Scottish Junior Cup with a 5-0 win at Neilston in the driving snow Pollok had hoped their next game in the competition would be the semi-final. Unfortunately the global pandemic put paid to that and a first round tie against Maybole at a damp and overcast Newlandsfield turned out to be the next chapter in the club’s cup history. Three changes from midweek saw Lumsden, Wharton and Stuart McCann come in for Longmuir, Bradley and Forde.

Pollok started on the front foot against their visitors from Conference A of the West of Scotland League and took the lead in the fourth minute. Good combination play between Horne, Weir and Grant down the right saw the latter’s cross fall to Lyon. He took an excellent first touch and fired towards goal. His powerful strike was blocked but pin-balled off the unfortunate Reid and into his own goal.

With incessant rain coming down the pitch was slick and Pollok were passing the ball about with aplomb. With quarter of an hour gone they doubled their lead. Grant’s deep cross was volleyed back across goal by McKenzie where McCann was on hand to supply a simple finish.

As the home side continued to dominate a sparkling move down the left saw McCann cross for an unmarked Lyon but his side-foot finish crept agonisingly wide of the post. Pollok’s third duly arrived five minutes before half time. Horne played a free-kick to Grant who checked inside his opponent and curled a low shot into the far corner.

The second half followed the same pattern as the first. Sideserf producing an accurate long pass in the fiftieth minute which allowed McCann to beat the offside trap. He was able to poke the ball beyond the outrushing Semple who then clipped the Pollok striker. The referee pointed to the spot. McGregor took command of the situation and coolly slotted the ball home from twelve yards.

The chances continued to flow and the next goal came just before the hour mark. Lyon teed up Esplin whose low drive from twenty two yards was saved by Semple but Weir was on hand to drive home the rebound.

Lumsden was called on to make two saves in quick succession as Maybole looked for a consolation. However it was the Southsiders who would add to their tally. After a sustained attack which hemmed the Maybole defence in Sideserf had a shot which was deflected out for a corner. When Horne swung the corner in Graham was on hand to knock the ball over the line from close range.

More chances followed before Pollok produced a fine move to finish the scoring off with just over ten minutes to go. A lovely passing move involving Esplin, McKenzie, Graham and Sideserf saw them advance to the edge of the Maybole box. Sideserf’s low cross picked out Forde in splendid isolation eight yards out and he made no mistake.

It was a comprehensive win for the home side whose reward is a second round trip to another Conference A side – Irvine Vics. 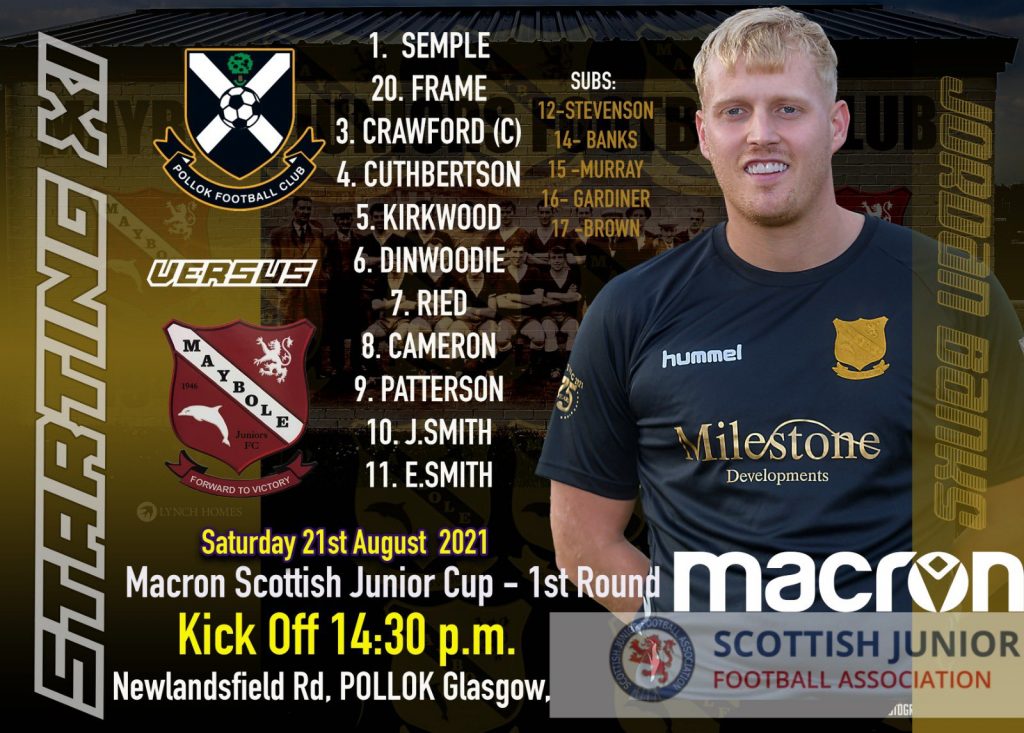 PREVIEW
Saturday will see a return of the Scottish Junior Cup, as we welcome Maybole to Newlandsfield.
Pollok had a midweek draw at Newlandsfield with Largs and will be hoping to get back to winning ways on Saturday. Maybole were also in action midweek as they travelled to face Whitletts Victoria and were also held to a draw, as the game finished 2-2. Maybole came from 2-0 down, as goals from Euan Smith and Robert Patterson secured the point, to extend Maybole’s unbeaten run to four games.
Maybole currently sit 9th in the WOSFL Conference A Division, with a record of 4 wins, 1 draw and 3 defeats in their 8 games so far, having scored 14 and conceding 13 goals. Formed in 1946, they are based at Ladywell Stadium, they have been managed by Carlo Walker since 2014, their colours are maroon and white. The club’s last trophy was the Ayrshire District League in 2012.
Both clubs don’t face each other too regularly with the last meeting coming back in 2015 when a 3-0 home win for Pollok came on the day the club lifted the league trophy as we gained promotion back to the West Super Premier League having spent a season in the West Super First Division. Pollok will be hoping there is no repeat of the last Scottish Junior Cup meeting when Maybole travelled to Newlandsfield and left Glasgow with a 1-0 win in 2000.
The winner of this tie will travel to Irvine Victoria on September 25th in the second round.