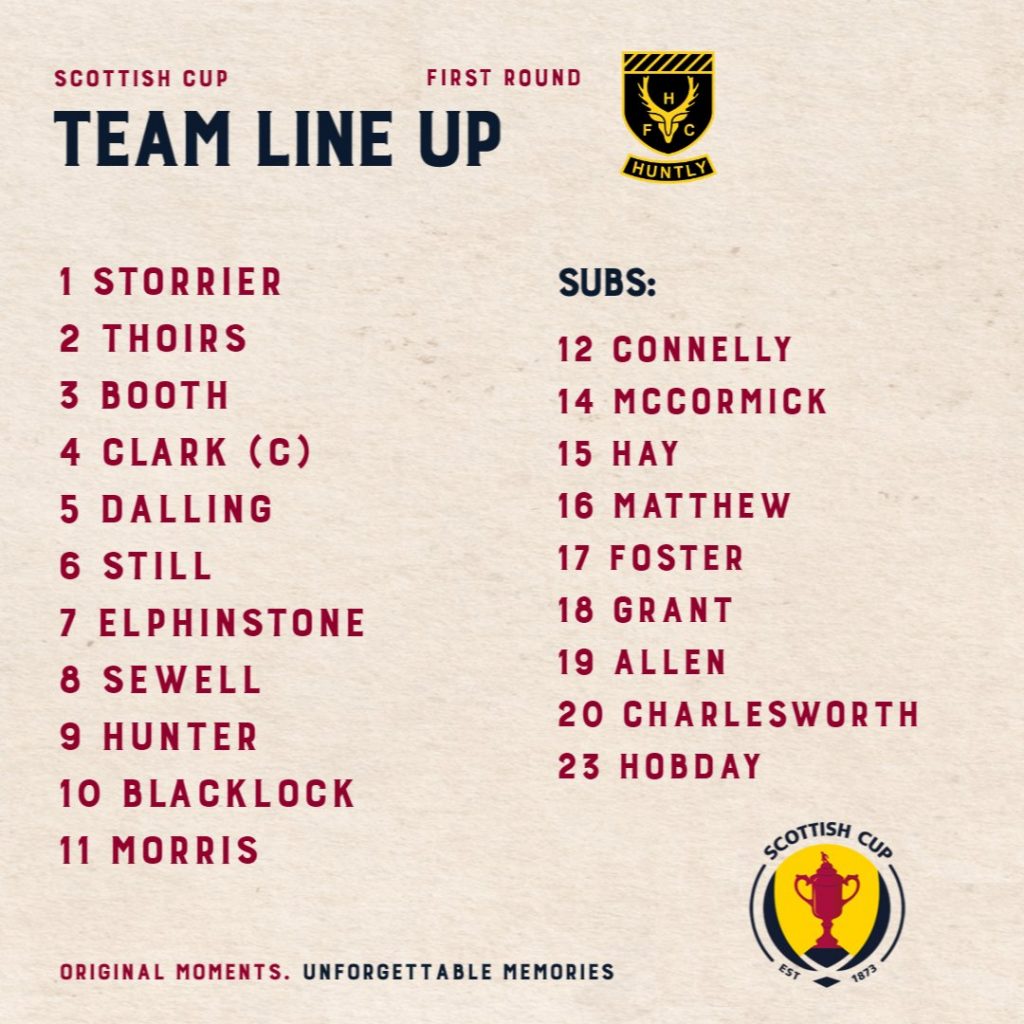 Pollok welcomed Huntly to Newlandsfield for the 1st round of the Scottish Cup on a Friday night under the lights. The game had been due to be televised but events elsewhere left BBC Scotland’s resources stretched and they were unable to fulfil their commitment.

A sell-out crowd of 874 impeccably observed a minute’s silence in memory of Queen Elizabeth II as the teams lined up. Pollok made four changes from the home defeat against Beith. Longmuir, Dykes, Forde and Lyon being replaced by Lumsden, Sideserf, Fraser and Buchanan.

Shooting up the hill Huntly started the brighter side and dominated the early proceedings. With nine minutes on the clock they made a rapier quick thrust down the left before a beautiful cut back. Just as it appeared Lumsden’s goal would be under threat from the subsequent shot Sideserf slide in to block. The home side’s first meaningful attack brought a goal. Sideserf sprayed the ball out to Mullen on the right-hand side. His pass down the line allowed Christie to nip in front of his opponent and head for the bye-line. His cross was perfect for the onrushing McCann to dispatch into the net with a clinical diving header.

Minutes later the roles were reversed but the result was the same. A long ball down the middle was allowed to bounce. McCann was on hand to flick it over the defence and into Christie’s path. He took a touch before dispatching it into the bottom corner to double Pollok’s lead.

As Pollok were now the dominant force they saw a goal disallowed for a foul on the keeper and had two efforts cleared off the line as crosses from the right by Christie and Mullen caused havoc.
Huntly had a shot on target in the thirtieth minute but it was straight at Lumsden as the game continued at a ferocious pace with one or two meaty challenges catching the referee’s attention.
With thirty-six minutes on the clock Buchanan wriggled his way into the box but was crowded out just as he was about to shoot. The ball broke to Lyon – on to replace the injured Fraser – and he blasted just wide from a tight angle. Moments later McCann glanced a header just wide as the Southsiders looked to extend their lead.

As half time approached Huntly stepped up their efforts to get back into the game. A well worked free-kick allowed Thoirs a sight of goal but he slipped in the act of shooting and the ball went wide. And in the last attack of the half a Blacklock shot from outside the box was heading for the corner before Lumsden intervened with a full-length diving save to tip it round the post.

The second half started as the first had ended with a fizzing Huntly strike which clipped the outside of the post. Pollok responded with a sweet strike of their own although Lyon’s shot was inches too high. Just after the hour mark Huntly played in a clever, curling cross from a free-kick that was surprisingly untouched by anyone as it made its’ way across the box. At the other end a similarly inviting cross – after more good work by Christie and Mullen – was touched. The defender slicing towards his own goal where the keeper made an athletic save to touch over. A corner for Pollok in the sixty-fourth minute was only half cleared to the edge of the box where Christie was waiting to smash home off the underside of the crossbar to make it 3-0.

Huntly responded with a good cross which Lumsden did well to collect at full stretch before the scoring resumed at the other end with just over twenty minutes to go. A Mullen cross was collected by McCann who fed Burns. His floated cross was attacked by Brownlie and headed down into the net to add to Pollok’s lead.

The home side were now in full flow and made it five with a devastating counter attack. A pass out of defence found Christie and he raced clear before crossing for Lyon who produced a composed finish over the goalkeeper.

Substitute Forde was determined to get in on the act and after seeing a rasping drive tipped over he was the beneficiary of a brilliant one-two with Lyon and a fortunate rebound from his first shot as he slotted home at the second attempt to make it six.

Pollok came close to adding to their goals tally in the final five minutes thru a goalmouth scramble and then a Duff flick which didn’t quite have enough power to get past the keeper.
It had been a complete performance and a well-deserved win which thoroughly pleased the vast majority in the crowd.

Pollok played in their home top but with white shorts and shocks to avoid a clash with Huntly’s dark shorts and socks. The superstitious amongst the Newlandsfield faithful will see this as a lucky omen and hope it’s repeated when Pollok go on to play in the 2nd round of the Scottish Cup for the first time in their history.

That’s right, Huntly visit Newlandsfield for Scottish Cup First Round action. Although the game won’t now be shown on TV across Scotland, we hope the fans will see a memorable game in the stadium.

Highland League team, Huntly, were formed in 1928. The Black and Golds have won the Highland League seven times, the first time back in 1930, they then had to wait until 1994 to win it again and would win it five times in a row. Their last league title was in 2005.

Huntly have also won the Scottish Qualifying Cup (North) on four occasions. The club reached the Fourth Round of the Scottish Cup in January 2008, going down to Dundee after dispatching Fraserburgh, Annan and Culter.

The Aberdeenshire club are currently 16th in the 18 team league. They have a record of  1 win, 1 draw and 6 defeats in the opening eight matches of the league campaign. Last season they finished 10th. In their last league match they went down 2-0 away to Buckie Thistle.

Pollok manager Murdie MacKinnon gave his thoughts ahead of the match.

“Really looking forward to what will be a huge game for both clubs.” Murdie said.

“Really disappointing that the game is no longer being screened live on TV but the occasion won’t change. There will be a big crowd and a great atmosphere I’m sure.”

Murdie is well aware of Huntly’s Scottish Cup exploits in the past.

“Huntly have a great tradition in the cup and will provide tough opposition so we will need to be at our best to get through the tie.” He said. “Huntly have been given our full respect as we took in their game versus Buckie Thistle. They showed that they are a real threat. We are really looking forward to the game and will be giving everything to get the result and book our place in round 2 of the Scottish Cup.”