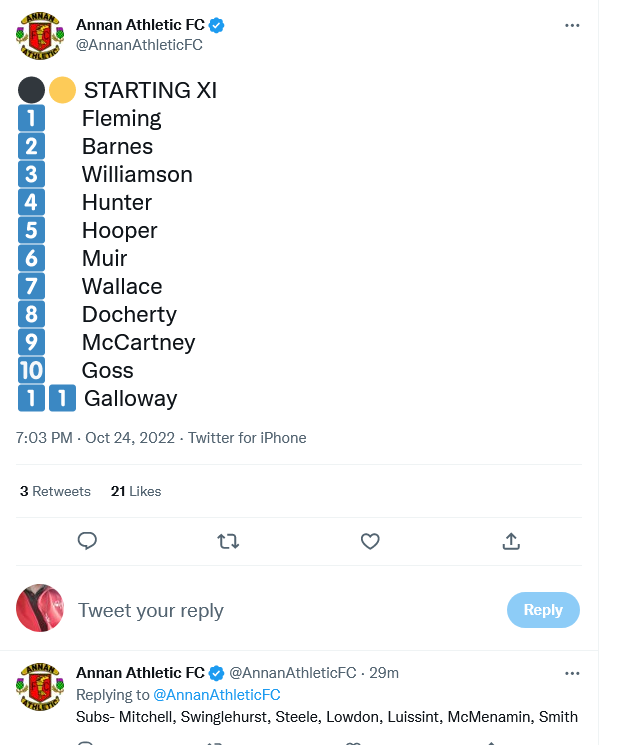 It’s Scottish Cup time again at Newlandsfield, Monday Night Football under the lights, on TV, what’s not to love?

League Two’s Annan Athletic are the visitors to Glasgow, with both teams eyeing a Third Round berth, it could be a great game.
Pollok come into this game, sitting 4th in the West of Scotland Premier Division, a point off top of the table. The Lok have played two matches in this season’s Scottish cup so far, winning 6-0 on both occasions against Girvan and Huntly, both ties being played at Newlandsfield.
Annan are currently 9th in League 2, with a record of two wins, four draws and five losses in their opening eleven games. Annan reached the League One Play Off final last season, losing out to Edinburgh City 3-2 on aggregate. This is their first game in this season’s Scottish Cup, last season they reached the Fifth Round, going out to Rangers, they had beaten Jeanfield Swifts, Gala Fairydean Rovers and Clydebank.
The Galabankies are managed by Peter Murphy, they were formed in 1942 and had spells in the Juniors, English non-league, South of Scotland League and East of Scotland League before being accepted into the then SFL in 2008 to replace neighbours Gretna. The club have won trophies in England, South of Scotland and East of Scotland area’s.