Pollok started the 2022/23 season of the West of Scotland Football League Premier Division with an away trip to newly promoted Petershill. A crowd of 300 observed a minutes silence as a mark of respect to former Pollok President Stuart MacDonald who had sadly passed away earlier in the week.

Pollok’s reshaped squad saw McKinnon give a starting debut to new signings Mullen, Rumsby, Docherty and Burns with fellow newcomers Christie and Sinnamon on the bench.

After a pre-season with more positive results than negative and highlighted by Forde’s wonder goal straight from kick-off against Newmains it was good to get back to competitive action.

It was a blustery afternoon in Springburn and the early play followed had little pattern to it. The first real sight at goal fell to the away side after a long ball over the top put McCann in down the right. His cross bounced in the middle of the box as the home side’s defence hesitated and Lyon nipped in to take a shot which produced a good save from the keeper.

Former Pollok favourite Hepburn was showing his usual appetite for the game and saw a back post header go just wide before an ambitious long-range shot went straight at Lumsden.

Lyon was at the heart of a lot of Pollok’s best play in the opening period and after a run from the centre circle saw a powerful shot tipped over the bar.

After Pollok failed to find the target from a couple of corners Petershill conjured up the best chance of the half so far. Having won the ball in midfield a couple of slick passes put Hepburn through on goal but from the edge of the box, his low shot went inches wide of the post.

As half-time approached Pollok opened the scoring with the best bit of play seen so far in the game. Burns floated a long-range pass over the defence where Docherty brought the ball down with an exquisite right-foot touch then showed great composure to slot the ball into the far corner with his left foot. A truly superb goal with which to open his Pollok account and showed great respect to his former club by not celebrating.

Moments later Docherty had the chance to double his tally after being put through down the inside-right channel but his shot was well blocked by McNeill.

The second half saw Krol on for injured captain Brownlie and a change of shape. Dykes was first to threaten with a curling effort from outside the box which went narrowly over. He was to prove more accurate later in the half.

Pollok spurned a couple of great chances to double their lead. A great bit of wing play by Lyon saw him cut it back to Docherty whose low shot was saved by McNeill’s foot. Then Dykes found himself in space at a corner but could only head wide.

As so often happens a team is made to pay for such profligacy. On the hour mark a sweeping pass out to the right found Hepburn in acres of space. His low cross found McDonald in a similar amount of space. His measured shot past Lumsden was spectacularly cleared off the line by Esplin but Brodie was following up to slot home the rebound. 1-1.

Hepburn had a jinking run which had the Pollok rear-guard retreating before Lumsden did well to block his shot as the game was back up for grabs.

After a good move down the right ended with Dykes’ shot blocked Pollok retrieved the ball and kept the pressure on. Dykes swept a cross-field pass back out to the right wing where it was fed on to Christie. He got to the bye-line before cutting back to Dykes who produced a calm, side-footed volley finish to restore Pollok’s lead with just over a quarter of an hour to go.

Straight from the restart Pollok won the ball back and broke quickly. Christie was given the chance to extend the lead but his powerful shot was batted away by McNeill.

With five minutes left Pollok did find a third. A corner from the right was missed by those in the middle and at the back post, Dykes controlled it on his chest before firing home off the underside of the bar.

Once the ref got to grips with the new rules regarding substitutions Sinnamon came on with a couple of minutes to go to take the number of Pollok debutants on the day to six.

A very decent performance from the Southsiders saw them start the season with three points on the road. The summer signings made a favourable impression as they continue to bed into their new surroundings. 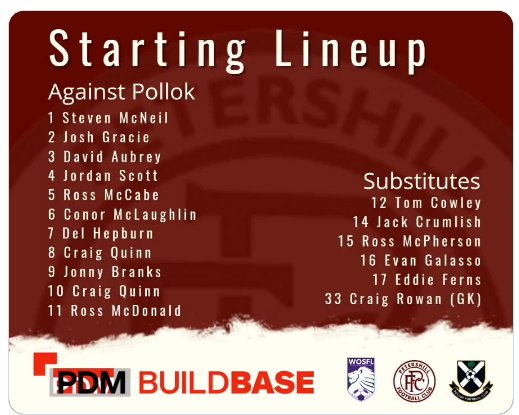