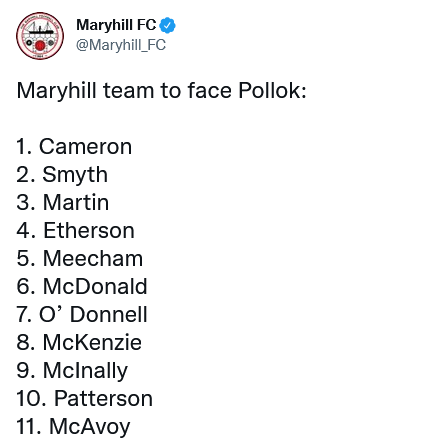 It’s Kilmarnock Pie West of Scotland Football League Cup action this weekend with Pollok facing Maryhill. Although it’s classed as an away match the game has been switched to Newlandsfield.

It is a chance for Pollok to return to winning ways following last week’s disappointment away to Auchinleck. The defeat was the first since way back in August 14th, a phenomenal run.

Maryhill are currently 4th in West Of Scotland Football League Conference A, with 14 wins, 2 draws and 10 defeats in their 26 games played. Last week they took on league leaders Arthurlie at Dunterlie and went down 2-0. In the previous round of the Kilmarnock Pie League Cup, Maryhill travelled to Cumock and left with a 2-1 win.

Pollok’s previous game in the tournament was a 6-0 home win against Campbeltown Pupils.

Maryhill were formed in 1884 and won the Scottish Junior Cup in 1900 and 1940. The clubs last trophy was back in 2013 when they lifted the West Central Division 2 title.

The last competitive match between the clubs was back in 2019 in the Sectional League Cup, again the match was classed as an away match although played at Newlandsfield, Pollok ran out 8-0 winners on the day.