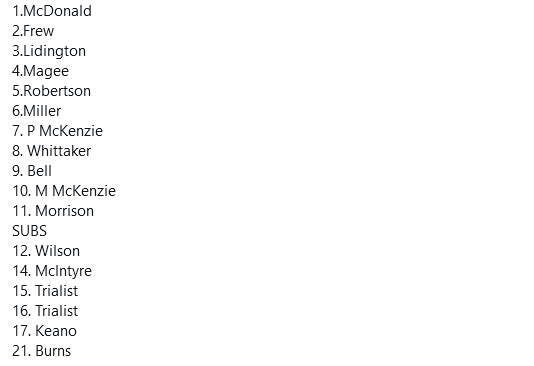 Match highlights from Mark Donnelly:
Match gallery (c) Ross MacDonald:
https://flickr.com/photos/[email protected]/sets/72157719730073540
Preview
Last weekend saw Pollok record a 5-1 win over Beith at Newlandsfield in a great display. Shaun Fraser opened the scoring on the 9th minute followed by goals from Derek Esplin, Adam Forde, Gary McCann and rounded off by a 90th minute goal by recent signing Callum Graham. Pollok’s second 5-1 win this season.
Following up from the weekend we travel to Blair Park to take on Hurlford on Wednesday. Hurlford are undefeated so far this season, a 1-1 draw at Blair Park against Rutherglen the latest result. They have picked up wins over Kilbirnie, Bonnyton and Glenafton and drew with Blantyre Victoria. Hurlford are currently a point and a position below Pollok in the West of Scotland Premier Division, sitting 5th. Pollok will have to be wary of danger man, Lewis Morrison who has netted five goals in five matches, Morrison signed for ‘The Ford’ in 2018 after a season playing for Sligo Rovers in Ireland, he previously had spells at Kilmarnock and St Mirren.
Hurlford were formed in 1912, they are managed by Darren Henderson. The last trophy they picked up was the West of Scotland Junior Cup when they won it 2018. They have won one Scottish Junior Cup, lifting the famous trophy in 2014.
Several former players have played for Kilmarnock, David Bagan, a cup winner with Killie, Davie Sneddon, a league winner with Killie in 1965 and a man of many clubs, Mark Roberts.
The last meeting between the clubs took place on January 18th, 2020 at Newlandsfield when goals from Stuart McCann and Chris Duff saw ‘The Lok’ victorious.