It can at last be confirmed where the Pollok Development squad will call home for the inaugural Scottish Lowlands Development League West: New Western Park in Renfrew. With matches being played on a Friday evening, a floodlit venue was required and the 4G venue at Renfrew fits the bill – a big thanks to all parties who enabled this to happen.

A reminder of who Lok will be facing when the action gets underway:

In what is likely to be the final part of the series of posts introducing the Pollok U20 Development squad ahead of the 2020-21 season, our last player to be unveiled is 17 year old Aidan Craig.

Aidan joins Lok from Morton where has been since August 2019. Aidan is a striker who began his career with St. Mirren and was with the Buddies youth side for four seasons. He moved on to Erskine Youth then Harmony Row, and spent some time on trial with Morton from the latter in 2018-19. He switched to Glenvale ahead of 2019-20 but won a permanent move to Cappielow not long after.

In the final part of the current series introducing our development squad, today we will meet the last three members of the 20s squad. Today we shall say hello to Kamil Krol, Matthew McMillan and Andrew Melville. All three are 17 years old.

First up, Kamil. Midfielder Kamil is from Poland originally but has been in Scotland for many years and stays in Coatbridge. He has played football with Hibernian, Clyde, Airdrieonians FCBC and Kilsyth Athletic, and signed for Airdrieonians, initially at youth team level, in September 2018. While at Airdrie he won the Reserves Challenge Cup and also picked up a Central League Cup at boys club level. He comes to us therefore having already worked with both Stephen McKenna and Chris Ferguson.

Matthew McMillan is a central midfielder from Johnstone who has had a long association with Glenvale AFC and is one of seven players on our U20 books to have come directly from them. With Glenvale he won the Scottish Cup, West Region Cup and the League and won the District Scottish Cup with Paisley District. Matthew also had a spell with Morton where he trained with and played for the Reserve team.

Andrew Melville is a central defender who comes to us from Linwood Rangers, his only previous club. Honours-wise, he has won the Schools Scottish Cup. Johnstone-based Andrew is currently studying Business at Strathclyde University.

Welcome to all three of the players unveiled today and good luck to all 19 that are currently signed up with Lok 20s!

Lok 20s are doing some fundraising ahead of the restart and are selling these stylish snoods via their Twitter account: 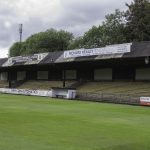 Today we are going to meet two more members of Stephen McKenna and Chris Ferguson’s Development squad, both lads they know well as they come to us from their Airdrieonians side. They are Luke Cameron and Jack Grimshaw.

Luke is a 17 year old defender / midfielder who has experienced playing abroad after living in Australia when younger. Luke is from Linlithgow and was on the books of Linlithgow Rose CFC before and after his time Down Under, but not long after returning he signed for Airdrieonians’ youth side.

Also being unveiled today is Jack Grimshaw. Jack, from Cumbernauld, joins from the Airdrieonians youth set-up. He is a composed, ball playing centre back/centre midfielder with real leadership qualities. He has been in and around many youth academies as his career progressed. Jack tells us that he is ready to go for the big season that lies ahead and is looking forward to joining the new set-up we have at Pollok.

Welcome to both Luke and Jack – and please check the site again tomorrow when a further three U20 signings will be revealed.

12 players were unveiled last week and this week you can expect to meet another seven! First up today is Sean Borland.

Sean is 17 years old and is a central midfielder. He can also play a more defensive midfield role in the middle of the park. Paisley lad Sean has played youth football at St. Mirren but has been with Glenvale since he was 11. He won the Scottish Cup twice with his age group at Glenvale.

Also being unveiled today is Keelan Braonan. Bellshill-based Keelan is an 18 year old midfielder who comes to Pollok from Airdrieonians where he has spent the last seven years of his career. He has also been with Hearts, St. Mirren, Hibernian and Motherwell when much younger, and counts the Raemon Gormley Cup and Reserves Challenge Cup among his Airdrie honours.

Welcome to both lads – and stay tuned for five more signings this week!

In the final part of our current series welcoming the new members of our U20s to Pollok FC, we are going to be introducing Leroy Smith and Mikey Verrecchia. There is symmetry with our first post as these lads come from Pollok United and Airdrieonians respectively, just like Douglas Cummings and Luke Biggart.

First up, Leroy Smith. Leroy is 18 years of age and is an energetic, fast centre forward. He has scooped a number of Player of the Year awards and netted 52 times in his best ever season. He helped the regional team reach the semi finals of the Glasgow Cup, with Leroy bagging a hat-trick in the quarter finals. Leroy has previously played with Hampden YFC, Clyde Community YFC, Weir Recreation and Hillwood, joining up at Pollok United for 2019-20.

And finally, for now, Mikey Verrecchia. Mikey is an 18 year old striker that joins up from Airdrieonians. He joined the Diamonds way back in the 2013-14 season from Jerviston BC. The only trophy he says he has won away from school football was the Reamon Gormley tournament.

In the second of two updates today, let’s find out who else is joining up with the U20 Development squad set to compete in Conference B once the football gets underway. Up next are two 18 year olds, Alex Quinn and Ross Shaw.

Alex comes to Pollok from Linwood Rangers, the only club he has played for so far. This is because Alex was previously involved at a high level in Judo and competed for Scotland in that discipline. Alex is an energetic box-to-box midfielder who wil be involved at either end of the pitch. He is a graduate technology apprentice at Morgan Stanley and is also studying software engineering at Strathclyde University.

The second of our two goalkeepers to be announced is Ross Shaw. Ross, or Shawzy as he is known, is actually a recent addition to the ‘goalkeepers union’, ending up in goal when a team-mate failed to show for a game – and the rest, they say, is history! Ross counts Renton Craigandro, Erskine Youth, Dumbarton United, Linwood Rangers and Vale of Leven among his clubs, and last season was with BSC Glasgow. Despite his age, he made it onto the bench for a game away to Berwick Rangers in November 2019.

Welcome to both Alex and Ross and good luck for the 2020-21 campaign! We will have a further two players being revealed tomorrow so watch out for news of those.

In the first of two updates today, let’s meet the seventh and eighth players to be revealed as members of Stephen McKenna and Chris Ferguson’s U20 Development squad. They are Fraser Lee and Ben Marshall. Both lads are 18 years old.

Fraser comes to Lok from Glenvale AFC, his home since the 2013-14 season. Prior to that he was with Johnstone Burgh. Fraser, nicknamed ‘Fras’ is a defender and he has an extensive list of previous honours: two Scottish cups, four league titles, three regional cups and one schools Scottish cup.

Joining Fraser in being announced today is Ben Marshall. Ben is a striker who also joins the club from Glenvale. He has also played his football with Clyde, Park Villa, Charlie Miller Academy and East Kilbride FC where he was a league winner.

Welcome to both lads and watch out for further updates later on.

Four down, more to go! And two of those ‘more’ arriving right now! Welcome to Pollok FC, Grant Jameson and Tiger Lawson!

Grant is an 18-year-old goalkeeper who joins Pollok’s Development side from Glenvale AFC, and he will find a number of his old team-mates at Lok in 20-21! He started his career with Renfrew Victoria and his two spells with them were punctuated by a stint at Dumbarton. He also played with Harmony Row and Erskine Youth before joining Glenvale last season.

Welcome to both Grant and Tiger – that’s now six players announced from the under 20s and we have even more to announce over the remainder of this week. There may even be some first team news along shortly too…