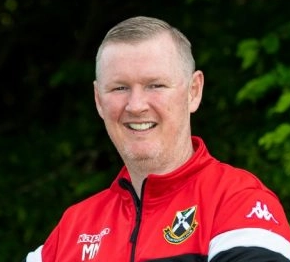 Pollok FC can today confirm that manager Murdo MacKinnon has offered the Club his resignation, and after lengthy, amicable discussions, the Club has accepted this, resulting in his leaving Pollok FC by mutual agreement with immediate effect.

We would like to place on record our thanks to Murdo for his four years of service since taking over as manager in 2018, having previously acted as assistant. Murdie brought much-needed stability to the club, leading us to the 2020 Junior Cup semi-final in his first full season in charge. The outbreak of Covid-19 meant that he missed out on a shot at the final, but his stewardship of the club throughout the pandemic was key to ensuring we emerged from lockdown in a position of strength, as he was able to keep a strong squad together as we returned to competitive football in 2021. This heralded a new era for the club, as we entered senior football in the form of the West of Scotland Football League and ended a grueling 38-game season in third place. Along the way, the club embarked on an unprecedented 23-game unbeaten run, spanning just short of six months. Our debut campaign in the WoSFL Cup ended at the semi-final stage as an injury-ravaged side fell to Hurlford United almost a full year after the first pre-season friendly.

This year has been another exciting new dawn for Pollok, as Murdo led us into the senior Scottish Cup for the first time since 2008 as members of the Scottish Football Association. It is this competition that in recent months has given us two of the greatest nights in our history. The first round saw a 6-0 thrashing of Highland League stalwarts Huntly, followed by that incredible 4-3 win against League 2 Annan Athletic in front of the BBC Scotland cameras as Pollok defeated SPFL opposition for the first time in our history to set up a mouthwatering third round tie against Ayr United at Somerset Park.

After one of the toughest periods in our history, Murdo leaves us in a position of strength with an exciting future ahead of us. All at Pollok FC thank him for his service to our club and wish him and his family all the best for the future.